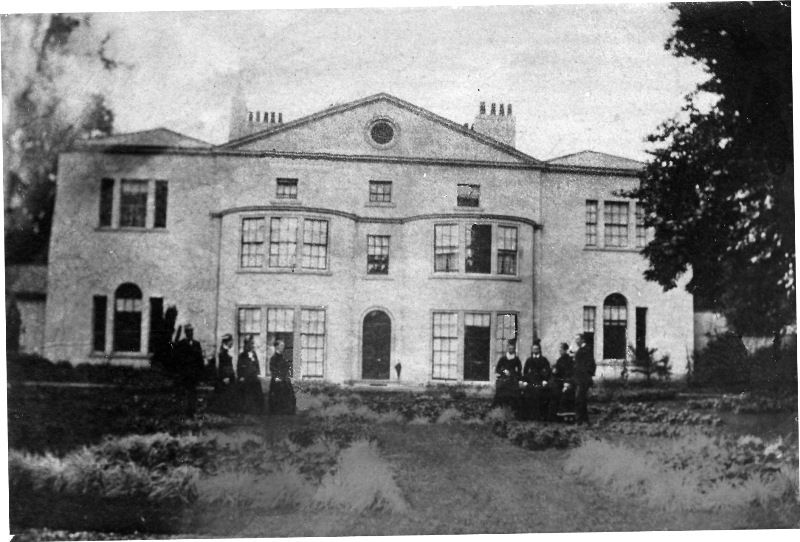 PLAN: Main house with four ground-floor reception rooms and central entrance hall opening into stair hall, flanked by pavilion wings, that to left containing ballroom, and that to right containing service staircase. Bedrooms and dressing rooms on the first floor.

EXTERIOR: the house is of three storeys and an attic. The west, front elevation is of five bays with a triangular pediment, flanked by set-back pavilion wings of a tall two storeys and a single bay. The central part has rusticated quoins, moulded cornicing to the pediment and an architraved oculus in the tympanum. The central doorway has a panelled door and fanlight with radial glazing bars in an architrave beneath a consoled cornice. The windows have projecting sills with six-over-six pane sashes on the ground and first floors, and three-over-three pane sashes on the second floor, some with missing glazing bars. The left-hand pavilion wing has a plain Venetian window with sashes with glazing bars. Above on the first floor is a tripartite window with sash windows with glazing bars to its left. The right-hand pavilion wing has a similar Venetian window with a door inserted to its right; two inserted sash windows at mid-storey height, and a similar tripartite window at first-floor level. Both pavilion wings have cornices continued from the central part, and hipped roofs. The central bays have lateral stacks, a flagpole to the centre ridge with a brick stack set back to its right. A later stack is built against the left return of the central part. Attached to both pavilion wings are later two-storey extensions which are not of special interest.

The east, rear elevation has a central round-arched doorway flanked by two-storey curved bays, each having three six-over-nine pane sash windows on the ground floor and three six-over-six pane sash windows on the first floor beneath corniced flat roofs. The second-floor windows and central pediment with oculus to the pediment are similar to the front elevation. The pavilion wings are also similar in appearance to the front elevation with ground-floor Venetian windows and first-floor tripartite windows, but without inserted openings.

INTERIOR: the entrance hall has a Doric-columned screen opening into the stair hall, with a mutule cornice to both. The doorways opening off have slender architraves and fanlights with glazing bars. A cantilevered stone staircase is situated beneath a roof lantern with plain moulded plaster panels to the side walls. The staircase has slender iron balusters decorated with plain circles and a ramped mahogany handrail. The open-well service staircase in the right-hand pavilion wing has alternate barley sugar and turned wooden balusters, with simpler turned balusters to its uppermost flights. It has a heavy, moulded handrail which appears later in part. Of principal interest is the ballroom in the left-hand pavilion wing. This has mahogany six-panel doors with moulded architraves, enriched moulded architraves to the windows, dado panelling, and a fine plaster ceiling in a Rococo/Neo-classical style with an elongated octagonal centre panel containing delicate foliage scrolls within an oval entwined with vines. Between the centre panel and the ceiling border are further foliage scrolls, and there is an enriched cornice and plasterwork entablature band. The fireplace in the centre of the south wall has been removed and patched, confirming that the panel moulding above the dado is modern.

On the first floor, the doors opening off the stair landing have fielded six-panel doors and moulded architraves. There are several C18 or early-C19 fireplaces in the main house including an C18 fireplace in the front right-hand room with marble slips in an enriched eared architrave, pulvinated frieze and moulded mantelpiece. There is also a decorated timber fireplace in the rear room of the left-hand pavilion wing.

The attic rooms have lime ash floors. There is also a large basement with brick-vaulted rooms, and chamfered oak beams and joists supporting the floors above.

The late-C19 or early-C20 two-storey extensions to the pavilion wings and the two-storey and single-storey buildings arranged round the depot yard are not of special interest.

Mapping Note: the footprint of the house is mapped as it appeared in November 2011. This differs on the east side of the house from the footprint currently recorded on Mastermap, which was either mapped in error or recorded an extension, incorporating the south bay window, which is no longer present. The 2011 footprint conforms to that on historic Ordnance Survey maps.

Thorne was a thriving town by the mid C18, having prospered following Charles I and Sir Cornelius Vermuyden's historic drainage of Hatfield Chase, the first fen to be drained in England.

The original construction date of Thorne Hall is not known, nor can the architect or owner for whom it was built be verified. It was previously said to have been constructed in 1818 for Mr Wormley, a rich farmer. However, the physical fabric of the building suggests a mid to late-C18 date, with early-C19 alterations, noticeable externally in the addition of curved, two-storey bay windows to the rear, east elevation of the main house. It is also known that in 1817 Robert Pemberton Milnes, former Tory MP, rented Thorne Hall and experimented in reclaiming waste land for agriculture. At this time the hall may well have been owned by the Ellison family. The Ellisons are known to have lived in Thorne in the C18. Richard Ellison was living there in 1740 when he became lessee of the Fossdyke, a man-made navigation in Lincolnshire. Though he subsequently lived, and was buried, in Lincoln, his wife was buried in Thorne in 1747, and several later family members also lived here. A description in 1829 describes Thorne Hall as '..a good family mansion, the property of Henry Ellison Esq, but at present unoccupied. To the house is attached a large well-walled garden, hot-houses, lawn, and shrubberies; and there are convenient stabling, coach houses, etc at a short distance from the hall.' White's trade directory of 1837 described the hall as a boarding school, but also, confusingly, as a 'modern mansion'. Subsequently, the Durham family lived in Thorne Hall from the mid C19. Makin Durham was a surveyor and civil engineer who perfected the technical procedure of warping, where controlled flooding was used to deposit a layer of fertile silt over previously barren land. His daughter, Caroline, and her son, Frederick also lived at the hall, the latter dying in 1913. The house contents were then sold at auction.

The first edition 1:10560 Ordnance Survey Map published in 1853 shows the house, identified as Thorne Hall and located on the east side of Ellison Road. To the south side of the main house are attached buildings, most probably the stables and coach house. The 1:2500 Ordnance Survey map published in 1892 shows the same footprint for the house, but by this time the large area of ground on the west side of the road had been landscaped, with a large, formal lake.

In more recent times the hall has been used as local authority offices; the subsidiary buildings have been demolished and the rear, east elevation now overlooks a depot yard. The landscaped garden on the west side of the hall is now a public park.

Thorne Hall, Thorne is listed at Grade II for the following principal reasons:
* Architectural Interest: as a good representative example of a mid-late C18 house with early-C19 alterations;
* Historic Interest: as a significant building in Thorne, demonstrating the thriving nature of the town by the mid C18, having prospered following Charles I and Sir Cornelius Vermuyden's historic drainage of Hatfield Chase, the first fen to be drained in England;
* Interior: the house retains good-quality fixtures and fittings including a Doric-columned screen in the entrance hall, mutule and moulded cornices, panelled doors with moulded architraves, and the two staircases, with the Rococo/Neo-classical plasterwork of the ballroom ceiling being particularly notable for its high level of craftsmanship.