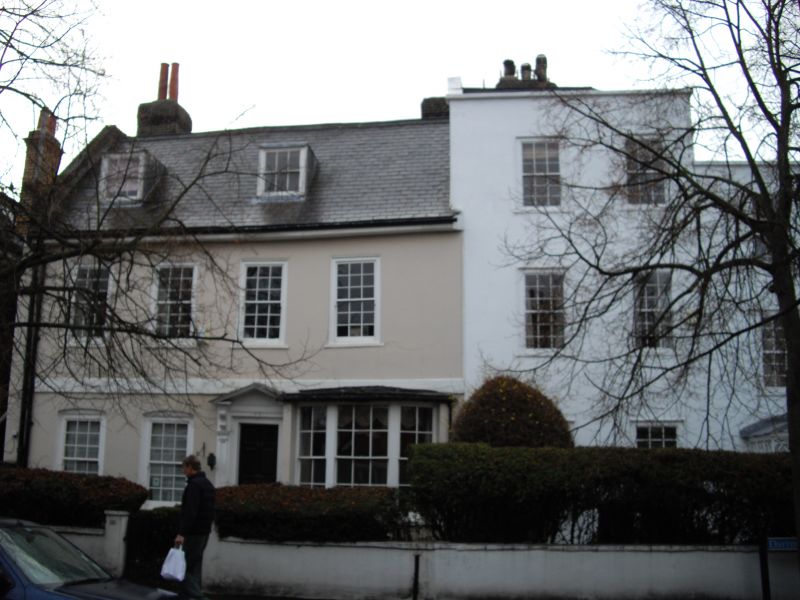 MATERIALS: stuccoed with a slate roof, hipped to both the front and rear, but concealed by a parapet to the front, with brick chimneystacks.

EXTERIOR: the principal east front has a stone parapet and there are three 6-over-6 pane sash windows in near-flush box frames on each floor. The windows of the north bay are at a lower height than the others. The entrance is through a ten-panelled door in the north bay under an early C19 elliptical-arched wooden porch which has a leaded roof with circular and teardrop motifs in the tympanum supported on delicate arched trellis panels. There is an attached stuccoed boundary wall with a stone coping and two square piers, one small with a flat coping, one large with a pyramidal coping, flanking a pedestrian entrance.

The rear or west side has a hipped roof over a wide three-storey south bay which has a cambered headed tri-partite sash window of 12-over-12 panes to the second floor and a multi-pane curved bay with a moulded cornice and base supported on carved brackets to the first floor. The ground floor has a glazed verandah. The north bay, lower and narrower but also of three storeys, has a penticed roof, a 6-over-6 sash window on the second floor and a slightly-projecting two-storey extension with a flat roof and a 6-over-6 pane sash window on the first floor.

INTERIOR: not inspected (2015), but according to the 1930 RCHME Survey the front ground floor room has panelling in two heights with a dado-rail and coved cornice. Between the passage and the hall is a round arch with fluted pilasters on the responds and moulded imposts; the soffit is carved with a bird and scrolled foliage. The rooms on the first floor have plain panelling.

Dartmouth Row was laid out in 1690 on the Earl of Dartmouth's estate. From the exterior No. 20 appears to date from the C18 but according to the Royal Commission on the Historical Monuments survey it was a late C17 house altered later. Originally it would have enjoyed wide views over the Heath and Kent countryside to the east and London to the west but the surrounding area was progressively built over.

It is shown on the First Edition 1870 25'' inch Ordnance Survey map as a separate property with its own boundary wall at the front and garden to the rear. The footprint has not changed on the 1896 or 1916 editions or subsequently.

It was originally listed at Grade II in 1973 together with the neighbouring property, No. 22.