A Grade I Listed Building in Geddington, Northamptonshire 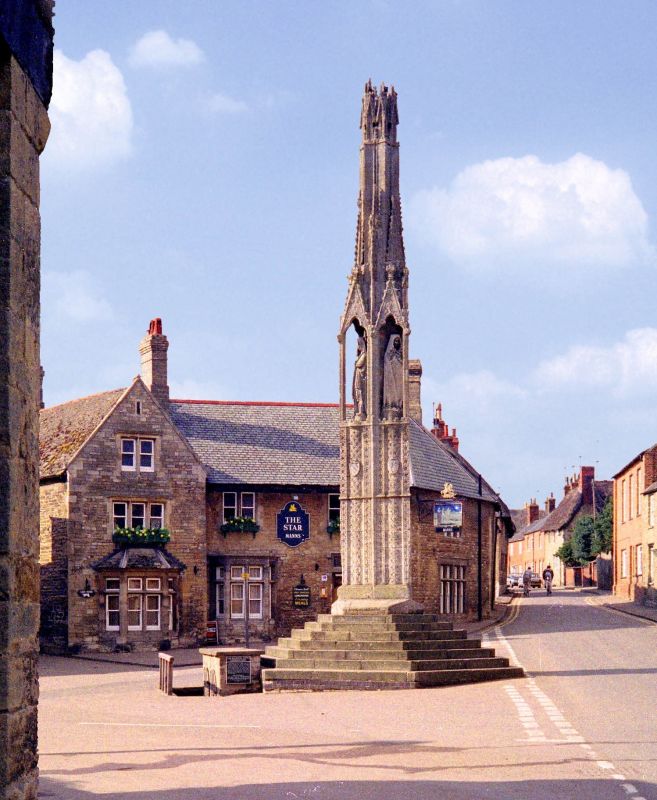 GEDDINGTON
SP8883 Queen Eleanor's Cross
1337-0/12/297
25/02/57
GV I
Monumental cross. Shortly after 1290. Discreetly restored
1892. Weldon limestone ashlar. Triangular in plan, with a
tall, subtly moulded basement divided by a string, with
diapering throughout and shields, carved with the arms of
England, Leon and Castile, and Ponthieu, to the upper part.
The middle section is made up of canopied niches, containing 3
figures of Queen Eleanor. Spikily pinnacled upper part. The
cross which doubtless originally crowned the whole is missing.
The monument is raised on T hexagonal stone steps, with some
blue brick repair. To south is a low block, "built 1789" (on
shield), topped by a single massive slab and containing 2
round-headed entrances (with studded round-headed doors)
leading to the spring over which the cross is built. A metal
plate records that "This monument is in the care of the
Ministry of Public Building and Works". It is the best
preserved of the 3 survivors (the others are at Hardingstone
and Waltham) of 12 crosses erected by Edward I in memory of
his wife, Eleanor of Castile, at the resting places of her
funeral cortege during its journey from Lincoln to Westminster
Abbey after her death in 1290. (At Geddington this was
probably the royal hunting lodge which formerly existed
north-east of the church) With its subtle geometry, rich
decoration and elegant sculpture, this monument is an
outstanding example of the court style of Edward I and
represents a high point in English Decorated architecture.
Scheduled ancient monument.