Church of St Michael and Railings 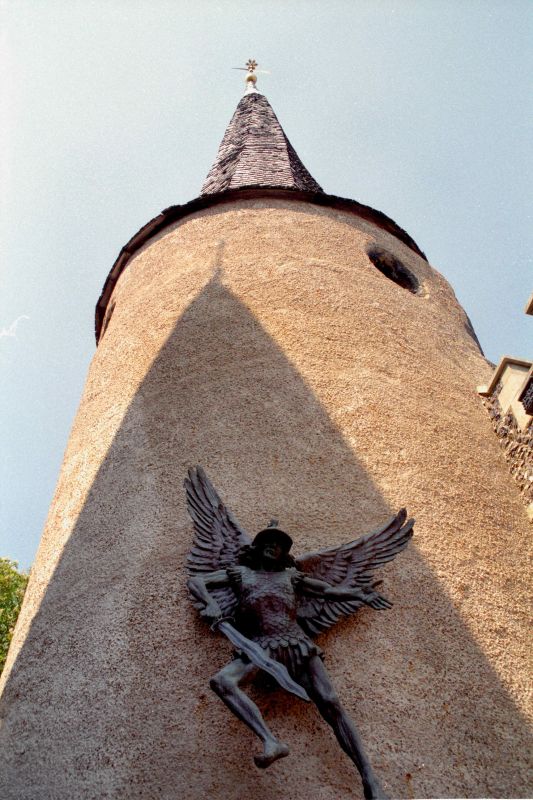 Parish church. C13, C14, 1748, restored and extended in 1885. Flint with
stone dressings and plain tiled roofs, except pebbledashed tower with shingled
spire. West tower, nave with north and south aisles, chancel. Round west
tower with circular bell-opening to south. Tall octagonal spire. Main
street front to south of flint with stone plinth, door and window dressings and
moulded cornice-parapet with ball-finials at each end, essentially the front
given by the remodelling of the south aisle wall in 1748, gothicised in 1885.
3 central pointed-arch windows with hood-moulds, enclosing two lancets and
quatrefoil in arches, with pointed-arch entrances with panelled doors and hood-
moulds in outer bays, topped by oculi now enclosing quatrefoil windows. Main
entrance in west end of south aisle with segment-headed doorway topped by small
round-arched window above and to left. All gables parapetted and coped.
Interior: 5 bay C14 south arcade with double hollow-chamfered arches. Timber
arcade of 1748 to north aisle, panelled arches to octagonal columns with quasi-
Tuscan capitals. Chancel of 1885. Monuments: Tablet to Sir Nicholas Pelham,
d. 1559. Columned with kneeling parents and children below. Between the church
and the hall to the left are railings of cast-iron, neo-Gothic in style
probably dating from the alterations of 1885. Central gates with pointed
overthrow with Gothic-arched soffit; panelled openwork sides with cusped
arches and colonnettes. Railings and gates matching with low dog-rails.