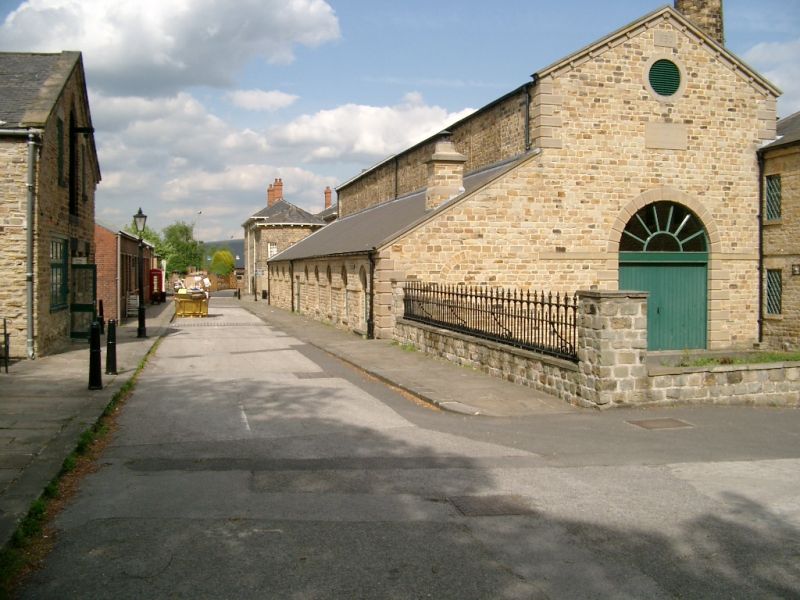 HOYLAND NETHER WATH ROAD
SK39NE
(east side, off)
5/21 Elsecar
- Aisled workshop immediately
to south-west of office
buildings at NCB workshops
GV II
Workshops. Mid C19, altered C20. Probably for G and W Dawes under lease from the
Fitzwilliam estate. Coursed, dressed sandstone, Welsh slate roofs. Tall elongated
single-storey range with lean-to aisles. Rebuilt gable facing office building
(q.v.) has large square-headed train entrance with quoined jambs. Datestone of 1850
removed and also stone plaque inscribed 'A Place the Everything and Everything in
its Place'. Other gable has a stone reading 'A Stitch in Time Saves Nine'. Right
return: aisles quoined and has 8 casements recessed beneath round arches; cleres-
torey walling divided by wallstone strips. Left return: aisle is masked by later
building (not of special interest). Boilerhouse chimney at left corner has octagonal
shaft rising from square base to broad cornice. Interior: partial arcades to each
aisle have cylindrical cast iron columns to round, brick arches; there was originally
a timber crane. Late building of the Elsecar Ironworks operated under lease from
Earl Fitzwilliam by George and William Dawes from c1850 until closure in 1884.
Later formed railway locomotive boiler repair shop prior to use as machine shop by
the NCB. C20 addition to rear not of special interest.