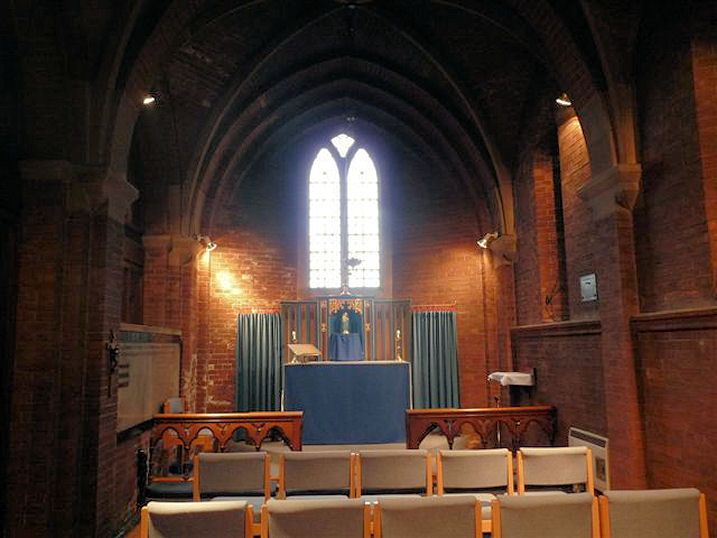 EXTERIOR: In a simple free Gothic style. The tall nave has a steep roof with eyebrow ventilators and shingled fleche between nave and chancel with open trefoil arcading to a single bell. The nave is 4 bays with tall 2-light Decorated clerestorey windows and small lancet aisle windows. The north-west porch has a north-east buttress with the figure of St Osmund in a niche. The entrance is framed by ringed granite shafts to recessed doors under a tympanum with inscription. The plainer south-west porch has a stepped segmental-pointed arch to west doors. The west front comprises high triple lancets, with 2 cusped narrow windows below. The chancel has one north and 2 south lancets, and a Decorated 3-light east window under chequerwork brick and stone in the gable. The 3-bay south chapel has gabled buttresses, 2-light east window and, on the south side, lancets under segmental arches spanning the buttresses. The north organ chamber has 2 tall high lancets recessed under a segmental arch, below which is an L-shaped vestry.

INTERIOR: The lofty nave and chancel is a single space with 7-bay crown-post roof, and a double truss on corbelled wall shafts to mark the junction of nave and chancel and to support the fleche. Nave arcades have round piers of glazed white brick, and stepped arches. Aisles have arched-brace roofs and the chapel has quadripartite vaults with freestone ribs. There are 3 arches on the south side of the chancel, leading into the chapel, and a high arch on semi-circular responds to the organ chamber. Walls are brick. The floor is tiles, with floorboards below the pews, and black-and white diaper marble floor in the sanctuary.

PRINCIPAL FIXTURES: The severely detailed octagonal font bowl is on an arcaded stem. In the aisle walls are Stations of the Cross in the form of plaster-cast panels. The polygonal wooden pulpit incorporates carvings of the Evangelist, said to be the work of the first incumbent. The banded Chellaston marble reredos incorporates a central arch with wooden figure of Christ against a mosaic background. Benches have inverted Y-shaped ends, but many of the benches have been removed. Choir stalls have ends with carved finials. A low cast and wrought-iron chancel screen is on a dwarf wall. Above it is a rood beam and traditional rood.

HISTORY: Parish church of 1904 by P.H. Currey (1864-1942), who had worked with Sir A.W. Blomfield and set up practice in Derby in 1888. He was also brother of the incumbent, and designed the accompanying cottages (separately listed).

REASONS FOR DESIGNATION: The church of St Osmund, London Road, is designated at Grade II for the following principal reasons:
* It is a commanding and ambitious Edwardian brick church notable for the tall clerestorey that gives the church its lofty proportions.
* It has high-quality Anglo-Catholic fixtures such as the reredos, Stations of the Cross and font.
* The church forms a strong visual group with St Osmund's Vicarage and St Osmund's House.