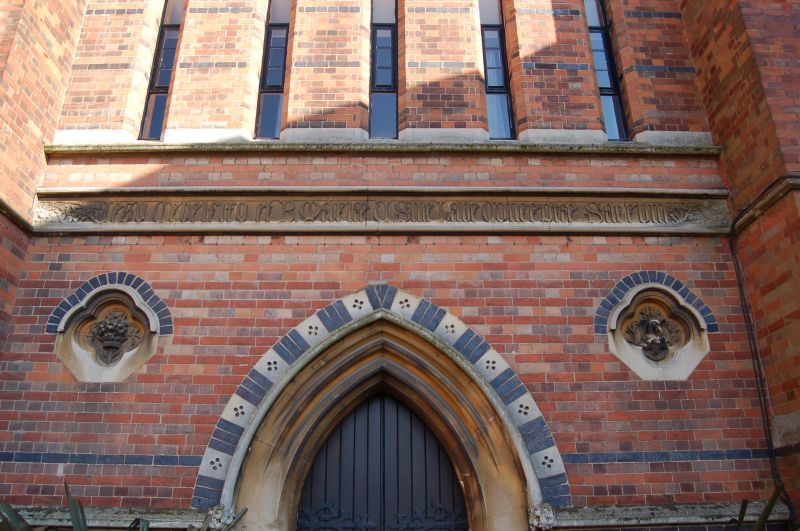 School. 1844 and after, and 1875. By Augustus Welby Northmore Pugin (the principal front and plan), completed by J.A. Hansom. Chapel by Edward Welby Pugin. Red brick with stone plinth and dressings and Welsh slate roof with stone coped gables and brick and stone ridge, end and projecting stacks (some restored and some few truncated). The flues are diagonally placed and have stone battlemented tops. In the Gothic style, with quadrangle behind principal front. 2½ storeys of 17 mostly 2-light windows in stone frames: paired cusped lancets, with ogee-headed lights. Ground floor windows similar but with transoms. Projecting tower to left, 2 front projecting stacks and, on either end, a facing gable with stepped buttresses, Tower of 3 stages has 2-leaved door with ornamental hinges under Gothic arched surround. Above right a tablet carved with the Crucifixion. A 4-light stone oriel over, and niche with statue above. A 1-light to either side of this. Above is a frieze with gargoyles, battlements, 2 side stacks and turret to right. To right of principal front a further 2-leaved door with ornamental hinges and stone overlight of 3-lights with cusped heads. In left gable attic a 2-light and small trefoil window over. On right gable a 3-light Decorated window with C19 stained glass and a niche with statue over. 4 2-light dormers.
On left side a front in similar style. On right side, next to corner, 5 tall
flat-topped windows with Reticulated tracery. The quadrangle behind the principal
front has a cloister corridor running round 3 sides with buttresses and similar
windows of 2 and 3-lights and an open arcade of Gothic arches of later C19
opposite the principal front. Ranges of 2½ and 3 storeys with 2-light dormers,
that to left partly rebuilt later C20 after fire. Behind the arcade range
the former chapel, of 1875, now subdivided vertically and horizontally. Its
W front, to rear, is of red brick striped with stone and blue brick. Central
2-leaved door with ornamental hinges under many - moulded arch. To either
side of door a quatrefoil with carved relief in centre. Long inscription band
over. Above this is a row of 5 narrow lancets with a large elaborate rose
window over. C19 stained glass. At the gable apex a corbled stone bellcote
with small gables and spire. Inside in what are now a dormitory and library
can be seen a l0-bay roof of Mansard shape with curved braces and wall posts.
The plaster ceiling panels are decorated, probably in stencil work, with coloured
roses and shields. In the library are the windows of the polygonal apse: 5
groups of 3 lancets divided by shafts with foliage capitals. C19 stained glass
in 3 groups. Behind the gable to the right of the principal front an open
timber roof to an earlier chapel. Large later C19 and C20 additions. Ratcliffe
was the first Catholic College to be founded in England since the Reformation.
Pevsner.