A Grade I Listed Building in March, Cambridgeshire 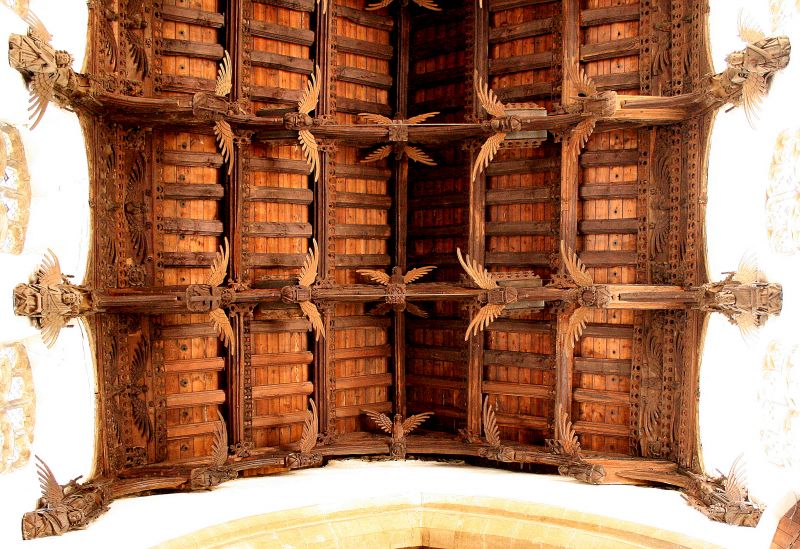 Parish Church, mainly mid C14, c1400, late C15 and c1528. Restored 1874.
Rubblestone with Barnack limestone dressings and flint and brick to late C15
clerestorey. Roof of nave leaded with tiles to rebuilt roof of chancel.
Plan of West tower, nave, North and South aisles. South porch, and chancel.
Four stage West tower and spire, 1350-1400, embattled with five stage
buttressing. The ground stage spans a right of way or processional route
with two loop window openings to the nave. Reticulated tracery to
fenestration including fine west window, and bell chamber openings,
Projecting newel stair turret in South East angle. Gable end of C14 nave
roof visible in East wall of Tower. Nave, C14 with clerestorey and roof of
late C15. Rubblestone, Barnack dressings, flint and brick. Embattled with
gable end parapet surmounted by bellcote. Clerestorey of flint and stone
flushwork. Each side with nine windows, each of two cinquefoil lights with
vertical tracery in four centred arches with red brick and flint voussoirs.
South aisle rebuilt in late C15, rubblestone and Barnack, embattled and on
splayed plinth with band of quartrefoils. Main cornice with beast
gargoyles. Two stage buttressing between bays, each having a window of three
cinquefoil lights with vertical tracery. The South porch is similar to the
South aisle and is dated 1528 (on beam in roof). Paired grotesques to main
cornice. Ogee outer arch with ogee and hollow moulding and engaged shafts to
responds. Inner arch of two continuous moulded order in two centred arch.
Original roof with hollow chamfered main beam. Chancel rebuilt 1874 by W.
Smith. In C14 style with reticulated tracery. Interior; South arcade late
C13. Two centred arches to five bays, each with two chamfered orders on
octagonal columns. The fifth bay is narrower. The North arcade although
similar is later with four and a half bays. The westernmost bay has been
incorporated in the tower. Two centred arches of three chamfered orders on
octagonal columns and bases. The angel roof of the nave is particularly
fine. It is of double hammer beam construction with a tier of winged angels
to the soffits of the jackposts as well as the hammer beams. The North and
South aisles are of similar late C15 date with blind arcading to the North
and South walls. The font is C12, recut. There are brasses to Andrew
Dredeman (d.1501) and his wife in the nave floor and to Anthony Hansard
(d.1507) and his wife, in the South aisle.