A Grade I Listed Building in Wickhamford, Worcestershire 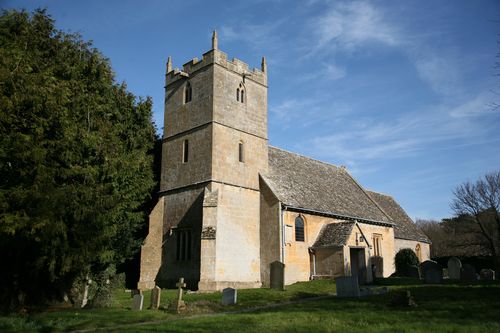 The tower is
of three stages with diagonal buttresses to the lower stage and has an
embattled parapet with corner pinnacles. On the south side is an illegible
inscription with oval surround. The bell openings are of two chamfered
pointed lights under a pierced pointed head. The middle stage has chamfered
louvred openings with round heads. The west window is of three cusped lights
under a flat head with hood and lozenge stops. To the west of the porch on
the south side of the nave is a C18 window formerly lighting a gallery. It
is rebated and chamfered and has a keyed round head. To the right (east) of
the porch are two windows of two cusped lights under flat heads with hoods
and lozenge stops. The gabled porch has a doorway with plain reveals and
timber lintel. At the apex is inscribed "1730", possibly altered from "1723".
The inner doorway has a canted head. The south wall of the chancel has a
chamfered lancet window and a priest's door with flat head. To its right
is a restored window of two cusped ogee lights under a depressed pointed head.
The north wall of the nave has a window of two trefoiled lights with a
quatrefoil in the head. To the east there is a window of two lights under a flat
head. In the north wall of the chancel are two blocked lancets. The east
window is of two cusped ogee lights under a pointed head, also restored.

INTERIOR: the tower arch is chamfered and has moulded imposts. It is partly
covered by a restored west gallery carried on two timber posts. The three
nave roof trusses have tie beams, vertical struts, upper collars, and
interrupted lower collars. At the eastern end is a ribbed boarded ceiling. The
chancel arch is pointed and chamfered in two orders which die into the responds.
Above are the painted arms of Charles II, dated 1661. On the south side of
the nave are box pews which retain some C17 and C18 woodwork and include carved
panels of various dates, of continental origin. On the north side is a
three-decker pulpit which incorporates some similar material. The chancel is ceiled
at collar level and has tie-beam trusses with vertical struts. On the south
side is a pointed piscina. On the east wall is a defaced medieval wall-painting
on a red ground. The turned communion rails are C18. On the north side of the
chancel are the Sandyn monuments. Two panelled alabaster chest tombs share a
single tester carried on four round arches which spring from black marble columns
with Corinthian capitals. On the tombs lie the effigies of Sir Samuel Sandys
(died 1626) and his wife Mercy, and of Sir Edwin Sandys (died 1626) and his
wife Penelope. Above the tester are shields of arms, obelisks and carved
figures. The chest are carved with kneeling children.