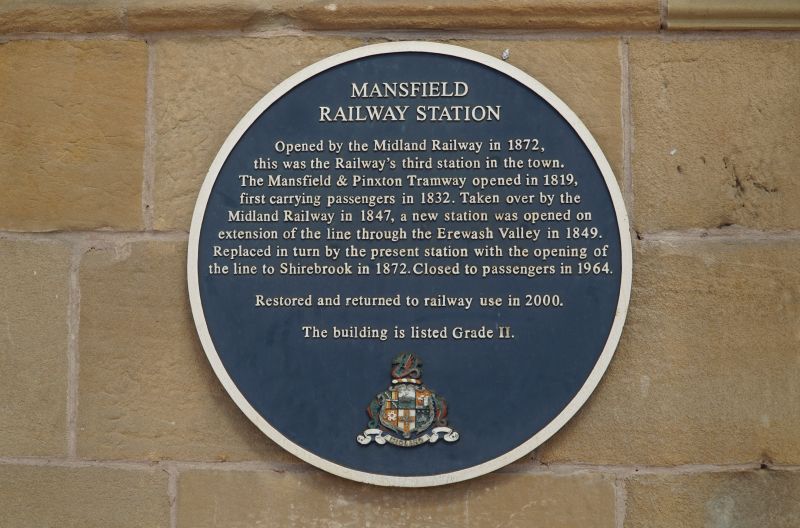 Railway station built in 1872, converted into a public house and altered late C20. Returned to use as a railway station between 1995-2000. Built for the Midland Railway Company. Coursed squared stone with hipped slate roofs and 2 ridge and 3 side wall stacks with bracketed cornices. Italianate style. Plinth, string course, rusticated quoins, moulded eaves. Single storey; 11-window range. Approach side has a higher projecting central block with an entrance in the form of a Venetian window. Panelled double door with overlight and fanlight in moulded surround with scroll keystone, flanked by single windows with side pilasters and cornices. Each return has a panelled double door with overlight and cornice on scroll brackets. Beyond, on either side, wings with 5 margin-light sashes with cornices on scroll brackets, 2 to right partly reglazed. The central opening of the left wing has been altered to form a door. Left return has 2 similar windows, partly reglazed, flanked by single panelled doors with fanlights and moulded surrounds. Right return a lean-to projection and a flat-roofed toilet block with 3 small windows. Platform side has moulded cornice and parapet and projecting end bays. In the centre, 3 round arches with moulded heads and square piers. To left, a doorway with fanlight, flanked by single windows, the left one blocked, linked by string course and hoodmould. To right, a large square opening with infill panel and 2 late C20 casements. Left end bay has a triple plain sash with projecting surround and cornice. Right end bay has a square headed opening with pilasters and cornice, with infill panel and a late C20 casement.