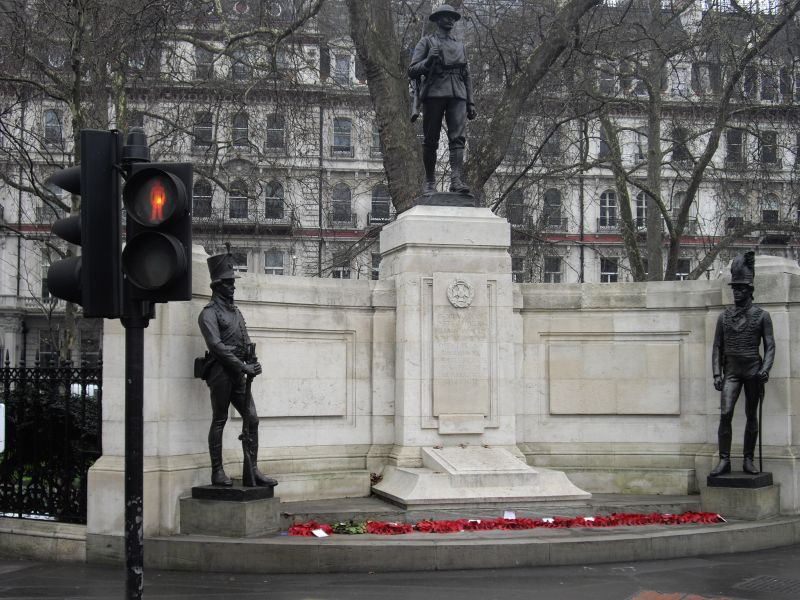 War memorial of 1925, with sculptures by John Tweed.

DESCRIPTION: the memorial comprises a curving Portland stone screen wall with a square central pylon. The pylon supports the life-sized bronze figure of a First World War rifleman marching forward helmeted and fully equipped, with his rifle slung over his right shoulder.

The terminal blocks to the screen wall are fronted by life-sized bronze figures: to the right an officer of 1800 (when the regiment was formed), his left hand resting on the grip of his sheathed sword, and to the left a soldier of 1806, standing easy with both hands resting on the muzzle of his Baker rifle. The regiment distinguished itself in both the Peninsular War and also the Waterloo Campaign.

On the front face of the central pylon the regimental badge is carved in low relief with below the principal dedicatory inscription, reading IN MEMORY OF/ 11,575 OFFICERS/ WARRANT OFFICERS/ NON-COMMISSIONED/ OFFICERS AND/ RIFLEMEN OF/ THE RIFLE BRIGADE/ WHO FELL IN/ THE GREAT WAR/ 1914 - 1918.

An inscribed stone plaque was placed on a raked plinth in front of the central pylon after the Second World War, in character with the original design. That inscription reads AND IN MEMORY/ OF 1329 OFFICERS/ WARRANT OFFICERS/ NON-COMMISSIONED/ OFFICERS AND/ RIFLEMEN OF/ THE CORPS OF/ THE RIFLE BRIGADE/ WHO FELL IN/ THE WORLD WAR/ 1939-1945.

The Rifle Brigade was formed in 1800, as The Experimental Corps of Riflemen, from men hand-picked from other regiments. In 1816 this body of men became The Rifle Brigade, winning various battle honours over the course of the C19. In the First World War it was in action from Mons onwards, growing from four regular battalions with two reserve ones to nearly 30. Over the course of the war it lost 11,575 officers and men; its many awards included 10 Victoria Crosses.

The war memorial, with figures sculpted by John Tweed, was unveiled at a very well attended ceremony on 25 July 1925 by the Duke of Connaught, Colonel-in-Chief of The Rifle Brigade. The design had been inspired by Colonel Willoughby Verner. The memorial was dedicated by Reverend Dr ACC Jarvis, Chaplain-General to the Forces. The 2nd Battalion provided one Guard of Honour, with a second composed of 50 past Riflemen, accompanied by a band under the command of Captain T Fairfax-Ross MC. The land for the memorial was given by the Duke of Westminster and the balance of the memorial fund was donated to the Rifleman’s Aid Society. The Roll of Honour listing all the names of those commemorated by the memorial is in Winchester Cathedral. Additions were made to commemorate the Brigade’s losses of the Second World War following that conflict.

In 1966 The Rifle Brigade was merged with The Oxfordshire and Buckinghamshire Light Infantry and The King’s Royal Rifle Corps to form The Royal Green Jackets, a large infantry regiment. By 2007, The Royal Green Jackets had been reduced to two battalions and the regiment was merged with three others to form The Rifles. The Rifles is the largest infantry regiment in the modern British Army.

John Tweed (1869-1933) was born in Glasgow and studied part-time at Glasgow School of Art. He moved to London in 1890 and worked for Hamo Thornycroft, studying at the South London Technical Art School and the Royal Academy Schools. He studied briefly in Paris under Alexandre Falguière. In 1893 he obtained an important portraiture commission through Edwin Lutyens and Herbert Baker and in 1901 was commissioned to complete the memorial to the first Duke of Wellington in St Paul’s Cathedral, after the death of Alfred Stevens. A close friend of Rodin, he organised the exhibition of Rodin’s sculpture at the Duke of Westminster’s Grosvenor House, London in 1914. Following the First World War he produced many statues and monuments, a number of which are listed, including Barnsley War Memorial, the statue of Lord Kitchener on Horse Guards, Westminster, and the statue of Sir John Moore at Shorncliffe Barracks, Folkestone.

The Rifle Brigade War Memorial, situated at the north-east corner of Grosvenor Gardens, Westminster is listed at Grade II* for the following principal reasons:
* Historic interest: as an eloquent witness to the impact of world events on the country and the sacrifices it has made in the conflicts of the C20;
* Historic association: the combination of a contemporary figure and figural references to the proud history of the Regiment is compelling;
* Sculptural: John Tweed was a leading sculptor of his generation and of war memorials in particular; the figures are notable for their realism, and the contrast between the dynamic central figure and the relaxed stance of the flanking figures is particularly effective;
* Group value: the memorial stands at the top of Grosvenor Gardens (gate piers and gates, Grade II), facing the Grade II-listed 23-47 (odd) Grosvenor Gardens and the back wall of the Royal Mews (Grade II), with to its rear 2-34 (even) Grosvenor Gardens (Grade II).