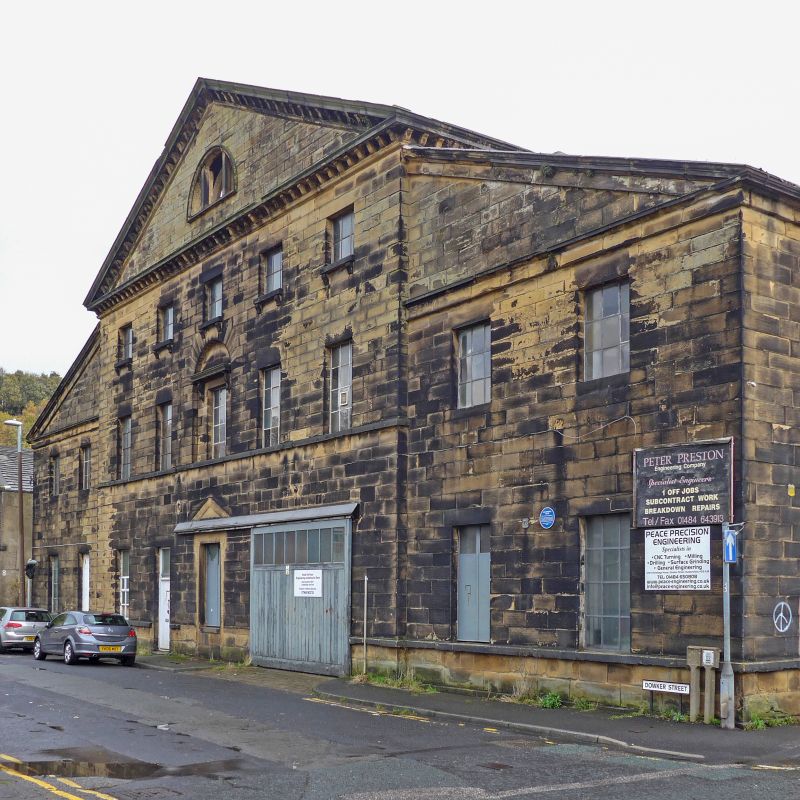 DOWKER STREET
1.
5113
(East Side)
Milnsbridge
Milnsbridge House
(formerly listed as
No 2, 4 and 6
(Milnsbridge House))
SE 1116 32/26 3.3.52.
II*
2.
Probably shortly after 1748. Architect possibly James Paire. Ashlar. Flat
modern roof. 3 storeys with attics, and 2-storey wings. Modillioned pediment
over whole central block, with Diocletian window in tympanum. Continuous sill
band on 1st and ground floor. 5 ranges of sashes: central 1st floor window
is set in recessed round-arched panel, and has moulded cornice on scrolled
consoles. Wings have half pediments abutting centre block, continuous ground
floor sills, and 2 window ranges each.
North end elevation has 3 window ranges: door, set in recessed round-arched
panel, has moulded surround and moulded cornice on fluted consoles.
South end elevation has 3 window ranges: central 1st floor window is set in
a recessed semi-circular panel, and central ground floor window is surmounted
by a moulded cornice on fluted consoles.
Former garden front (to east) differs from entrance front in following respects.
Tympanum has an oculus set in a very elaborate Rococo cartouche. 1st floor
windows have moulded cornices set above the voussoirs of otherwise plain frames:
central window, however, has a moulded surround, pulvinated frieze and moulded
cornice on scrolled consoles. Ground floor windows have moulded surrounds,
pulvinated friezes and moulded cornices. Central door has moulded surround
with Wilton frame, pulvinated frieze and segmental pediment on scrolled consoles.
Ground floor windows of wings are the same as the 1st floor windows of the
centre.
Interior, except for the north wing, was entirely gutted in recent years.
Some fragments of lush Rococo plasterwork still adhere to outer walls.
History: In the early C18 the house occupying this site belonged to John Dawson,
on whose death it passed to his wife, Elizabeth. On the death of Elizabeth's
second husband, William Radcliffe, in 1748, the property passed to their son,
also William (1710-95), and (on stylistic grounds) it seems likely that he
was the builder of the present house.
On his death the house passed to his nephew Joseph Pickford of All Hill, Lancs,
(1744-1819), who changed his name to Radcliffe. He distinguished himself as
a J P in the Luddite disturbances of 1812, for which he was awarded a Baronetcy
in 1813.
The 2nd Baronet, Sir Joseph's grandson, appears not to have occupied the house
as in the 5th vol of Neale's "Seats....." (1822) it is described as being occupied
by Joseph Armitage, son of George Armitage of High Royd House, Honley. This
must have been a lease, as Armitage did not buy it until 1825. It remained
in the hands of the Armitage family until 1920.