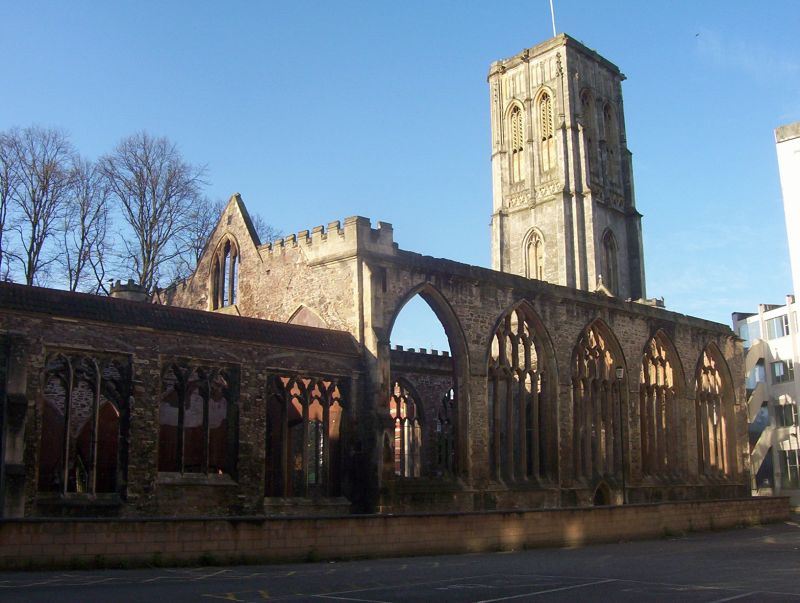 Formerly known as: Temple Church, Church of the Holy Cross
VICTORIA STREET.
Also known as: Holy Cross Church VICTORIA STREET.
Church. c1400, upper stage of tower 1460, gutted c1940. Bath
stone ashlar, and Pennant rubble with ashlar dressings, to an
open shell without roof or glass.
PLAN: aisled, unclerestoreyed nave, chancel with chapels, and
SW tower. Perpendicular Gothic style, with a Somerset-type
tower.
EXTERIOR: 2-centred arched E window of 5 lights with trefoil
heads, between short clasping buttresses. A low vestry
attached to the NE of 3 bays, with 3-light mullion windows and
a parapet, and a N door with a mullioned overlight. 3-bay
chancel has 3-light windows with trefoil heads and label
moulds, and buttresses at the ends. 5-bay nave with 5-light
windows, drip mould and crenellated parapet; in second bay
from W is a doorway with chamfered reveals, the arch breaking
the line of the sill above. Similar S aisle. The W end of the
N aisle has an octagonal stair turret between the N aisle and
the nave, and a mid-Georgian porch to the nave with Corinthian
pilasters to a segmental pediment with a cartouche inside and
an urn on the top; inside is a round-arched doorway with an
acanthus key.
5-stage tower to end of S aisle, divided by deep drips, with
an internal stair turret in the SE corner: a low plinth, with
three W niches with crocketed pinnacled hoods, beneath a
4-light window, the hoodmoulds running into the drip course;
2-light windows to the second and third stages, all blind;
niches with foliate bases flank the third stage N window,
triangular buttresses either side ending in attached
pinnacles; at the base of the belfry is a band of triangular
traceried panels; above are paired lights with mullions and
transoms and ornate fretwork, separated by slender buttresses
with blind panels above, the corner buttresses ending in
attached pinnacles; drip with gargoyles and a blocking course;
the octagonal stair turret is slightly expressed in the belfry
with blind panelling.
INTERIOR: column bases to a 5-bay nave, with round responds at
each end; the base of the tower has a vaulted roof, entered
through an arch with soffit quatrefoil-headed panels.
Memorials: a finely carved memorial on the N wall of the tower
forming an aedicule with a skull at the base.
HISTORICAL NOTE: The church suffered bomb damage in the Second
World War, and is preserved as a gutted shell; it originally
had a fine unclerestoreyed nave. The lower stages of the tower
leant to the W soon after completion, and the belfry slightly
corrected the angle; the pinnacles were never built.
(Gomme A, Jenner M and Little B: Bristol, An Architectural
History: Bristol: 1979-: 59; The Buildings of England: Pevsner
N: North Somerset and Bristol: London: 1958-: 409).