A Grade I Listed Building in Ashover, Derbyshire 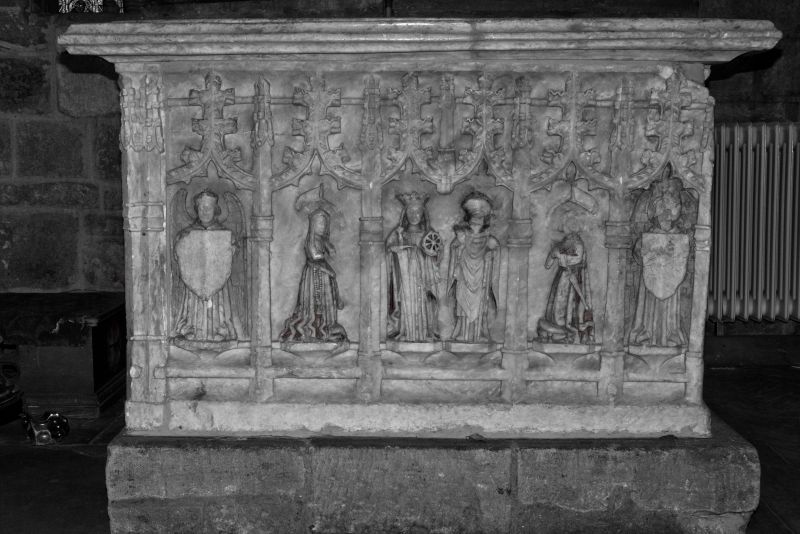 Church. Early and late C15, with late C13 and mid C14 remains.
Squared sandstone with shallow-pitched lead roofs and with
embattled parapets to all except for the north aisle roof.
Comprises a west tower with a stone spire set back behind
embattled parapets, a nave with clerestory, north and south
aisles, a south porch, and a north vestry and organ chamber.

The tower is of three stages with angle buttresses and has bell
openings of two cinquefoiled lights with dagger tracery below
flat heads. The lower stages are blank on the north side and
have a window of one ogee light facing west. The south wall
includes a slit window, a clock face, and a round-arched
doorway under a straight cornice. Below the parapet are stone
gargoyles. The clerestory has 3-light mullioned windows with
flat heads and with slightly pointed heads to the lights. The
north aisle has similar windows, with lights which are either
segmental or slightly pointed. Three windows face north and one
faces west. The north wall contains a doorway with moulded
trefoiled ogee head and has a projecting boiler house with
chimney. Set back to the east its the one-bay organ chamber
which has a C19 window of three cinquefoiled lights under a
pointed head with Perpendicular tracery. Adjoining to the east
is the vestry, which has a pointed doorway with a one-light
window to its left and a 2-light window to its right. The
south aisle is of three bays to the east of the porch and has
mullioned windows of three lights with round heads under straight
lintels. The porch has an outer arch which is pointed and
chamfered in two orders. The coped gable is of shallow pitch and
has a Cl8 stone sundial of square plan at the apex. The inner
doorway appears to have been rebuilt and is of late C13 type,
with a pointed arch moulded in three orders and with angle shafts.
The east window of the south aisle is of three lights with renewed
Perpendicular tracery under a Tudor-arched head. The east
window of the chancel is of similar type. The three windows in the
south wall of the chancel are each of three lights under flat
lintels. The door to the right of the left-hand window has a
chamfered ogee arch with a carved head in the centre of its
hood mould.

INTERIOR: The internal walls are of exposed sandstone rubble
with ashlar dressings. The tower arch is pointed and wave
moulded in two orders. The northern nave arcade has four bays of
steeply pointed arches chamfered in two orders springing from
octagonal piers with moulded caps. A 5th, eastern, bay has a
lower arch. The south arcade is of four bays with taller pointed
arches chamfered in two orders and with slim octagonal piers.
The chancel archway is partly a C19 reconstruction and is
pointed and chamfered in two orders. The outline of an earlier
roof, below the level of the present clerestory, can be seen
in the wall above, and also above the tower arch. To the south
of the arch a squint opens into the chancel. To the north a
doorway and steps in the east wall of the north aisle formerly
led to a rood loft. The boarded roof over the nave was renewed
in 1968 and is of a shallow pitch with exposed tie beams,
rafters and purlins. The south aisle roof also appears to be a
C20 renewal, but the north aisle roof may be C16 and has
chamfered rafters and a moulded ridge and principals. The
north wall of the chancel contains two chamfered recesses with
ogee arches. Set within each is a moulded bracket. Between
them is a vestry doorway with moulded Tudor arch and ribbed
plank door.

The organ is set within a pointed archway. The
boarded roof has three shallow iron-strapped king-post trusses.
The lead font dates from c1200. It is set on a moulded
octagonal base and is ornamented with 20 figures of men clad
in flowing drapery and set within semicircular arches. Above
the tower arch are boards painted with the Lord's Prayer,
Creed, and Ten Commandments. The chancel screen was moved from
the north aisle to its present position in the 1860s. It dates
from 1511 and is of oak with Perpendicular tracery and a
central Tudor archway. The pulpit is of C17 oak panelling. The
south aisle contains an alabaster tomb chest with effegies of
Thomas Babington (d. 1518) and his wife. The sides of the
chest are decorated with crocketed ogee archways containing
figures of saints, angels, and mourners. At the east end of
the chancel are two early C16 brasses.

Wall monuments include
one to Francis Parkes (d. 1713) to the east of the south
doorway, which has a cartouche, carved cherubs, and a cameo
bust of a man. Late C19 and early C20 stained glass windows
include one in memory of John Lee (d. 1915) with figures of 3
saints.