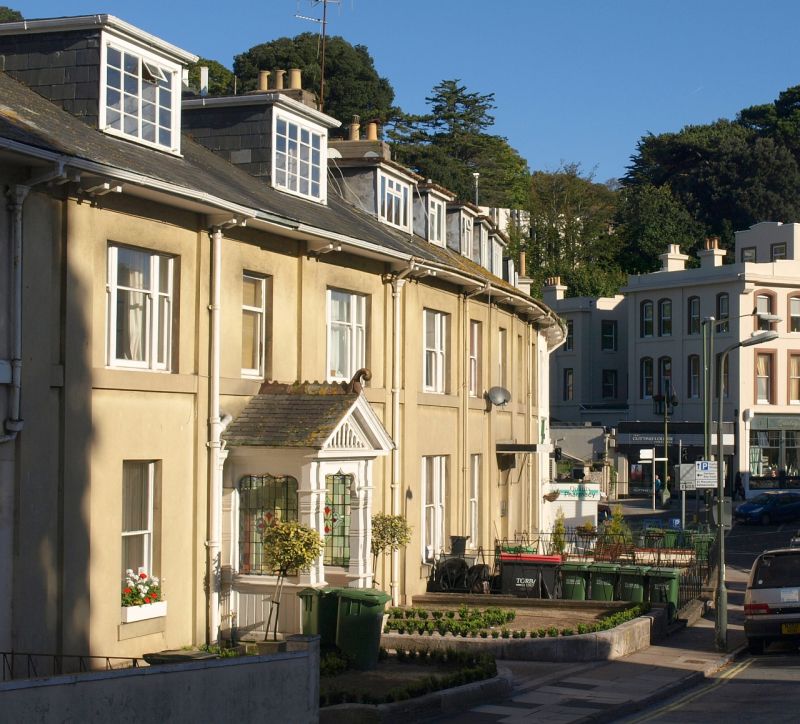 Convex row of six houses, originally forming the major part of a crescent of eight houses, believed to have been built at some time between 1822 and 1838. The builder was Jacob Harvey, and sons, for the Palk Estate. Two houses towards the centre of the row (Nos. 5-7) were destroyed by bombing during World War II, and were subsequently re-built, now having the appearance of a single building, following the architectural manner of the original group. C20 additions to rear.

EXTERIOR: the houses are two storeys high, with basement and attic. Nos. 3, 9-11, 13 and 15 are of three bays; Nos. 5-7 is a five-bay building. Nos. 3, 13 and 15 have the door to one side; Nos. 5-7 and 9-11 have central doors. The row is united by a regular and consistent stylistic treatment, in which the bays are separated by plain pilaster strips cutting across the wide first-floor sill band and rising into the eaves band; paired pilasters frame the building known as Nos. 9-11. The paired eaves brackets rise from the pilasters. The first-floor windows appear originally to have had shorter, three-pane, upper sashes, as indicated at Nos. 3, 9-11, 13 and 15. Nos. 9-11 has tripartite windows with timber mullions on the first floor, to left and right. These are reproduced in the outer windows of the re-built Nos. 5-7. The buildings have a variety of dormers – those at Nos. 3, 13 and 15 are segmental headed, and probably original, though only the dormers at No. 13 retain their original three-over-three sash frames. Six-panel doors, probably original, to Nos. 3 and 15; No. 3 has an original geometrical fanlight with margin lights. A gabled Edwardian porch has been added to Nos. 9-11, with slate roof, balustrades to the pediment and side panels of stained glass. There is a modern canopy over the door to Nos. 5-7.

Nos. 3-15 Park Hill Road, Torquay comprise a group, believed to have been built at some time between 1822 and 1838, by the Harvey family. Jacob Harvey was builder to the Palk Estate and, together with his sons, undertook the estate's development during the first half of the C19, the terraces around the harbour being largely complete by 1838. The group under consideration first appears, as Park Crescent, on John Wood's Plan of Torquay and Environs, published in 1841, at which time it curved behind the 1820 Rotunda market standing to north-west, possibly built by the Harveys to the design of John Foulston, and demolished in 1853. Originally constructed as a row of eight buildings, the original Park Crescent has undergone some change. The present No. 1, which stands at the corner of Parkhill Road and Torwood Street, was remodelled after the widening of Torwood Street in 1864, and the demolition of the house which originally began the row. In May 1944, two of the houses – on the site of the present Nos. 5-7 – were destroyed by bombing, and were subsequently re-built as a single building. The re-building is understood to have taken place in the 1950s. Park Crescent became part of Park Hill Road in 1948.

* Architectural: as a striking early C19 crescent, unified by a bold but understated architectural framework of pilasters with sill and eaves bands
* Historical: constructed by the Harvey family, builders to the Palk Estate, the crescent formed a noteworthy part of the coherent development of the Torquay as a resort town
* Group Value: with other listed buildings in the immediate vicinity, notably No. 1 Park Hill Road, which also forms part of the crescent, and the three pairs of houses of similar date which formerly made up Park Street, standing to south-west; the late C19 redundant Church of the Holy Trinity stands immediately opposite the crescent