A Grade I Listed Building in Dorchester, Dorset 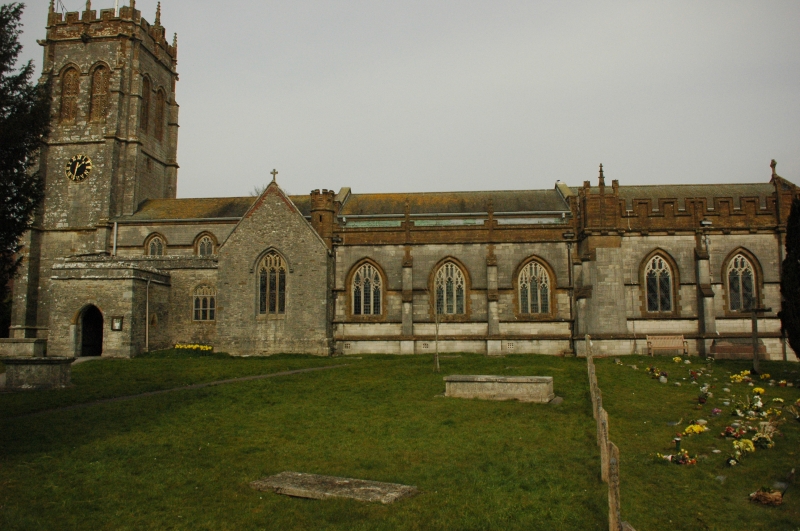 I
South door late C11, South aisle and north part of porch C12. South transept C14. Tower, south part of porch, west wall of south aisle, arches to nave and south aisle of south transept late C15. South transept re-modelled in 1754 (when a now-destroyed chancel was added). North aisle and north arcade 1833 (arcade replaced in 1907). Whole of remainder 1907. The architect of the extensions of 1833 was the Rev Henry Moule (Vicar from 1829 to 1870). The architect of the rebuilding in 1907 was Jem Feacy of Dorchester at the instance of the Rev R G Bartelot.
The most remarkable features of the fabric are the south doorway and the west tower. South doorway has a carved tympanum of Caen stone in a very realistic style (c.f. Bayeux Tapestry of late C11), representing St George, mounted, with praying soldiers on the left and dead or dying soldiers on the right. It allegedly represents St George's miraculous intervention in the Battle of Antioch (1093). West tower is ashlar. 2 strings, moulded eaves cornice, and crenellated parapet. Set back buttresses, with gargoyles at eaves cornice, and diagonally-placed pinnacles with crocketed tops. Polygonal stair tower projecting at north east corner, surmounted by more crocketed pinnacles. 2 bell openings with transoms and Perpendicular tracery on each side of upper stage. West window with perpendicular tracery. Stained glass in west and south transept windows by Morris and Co (1903 and 1913, from older cartoons), Communion rail of circa 1700 from Milton Abbey. Altar: circa 1390, ashlar, brought from Salisbury Cathedral in 1958; panelled Perpendicular front. Doors under west tower Bavarian circa 1750, brought here in 1935, 2 shaped panels each with Rococo ornament in upper ones. Door in south porch entrance dated 1717 in nails. Pulpit dated 1592, ashlar; panelled, carved initials (possibly the oldest post-Reformation stone pulpit). Font C15, ashlar, octagonal, panelled sides. Chancel stalls C17. Roman tomb-stone in nave.