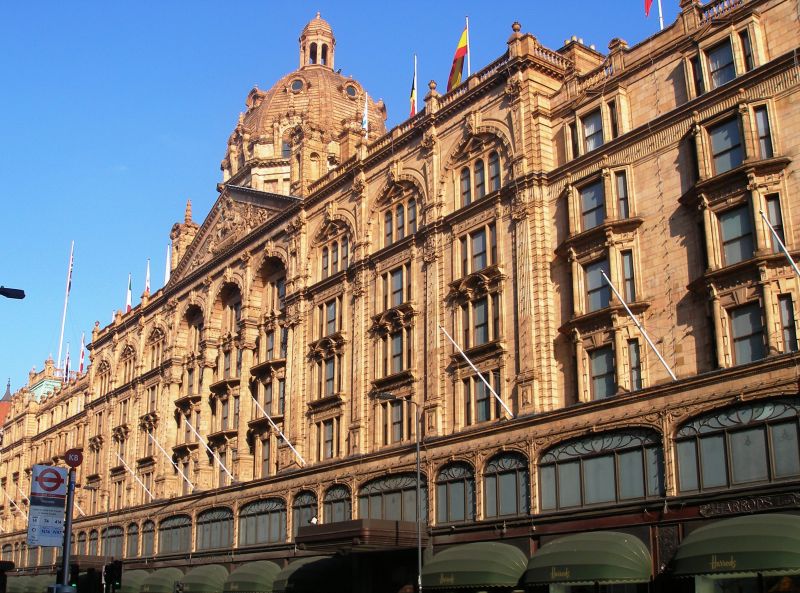 HISTORY: In 1853 Charles Henry Harrod, who had begun trading as a grocer in Cable Street, Stepney, occupied a small house and grocery facing Brompton Road. The 'official' foundation date of 1849 is not confirmed by documentation. His son, Charles Digby Harrod began to build up the business from 1860 and diversified adding non-food departments, extending the premises back into Queen's Gardens, which occupied the backland behind Brompton Road. In 1889 Harrods became a limited company and embarked on a scheme to purchase and redevelop the street block back to North Street, later Basil Street. C. W. Stephens was appointed architect in 1894, and began the rebuilding programme, completed in 1912. In 1921, Harrods secured the freehold of the whole site from the Goddard Estate. In 1959, Harrods Ltd. was taken over by House of Fraser, and the group was acquired by Mohammed Al Fayed in 1985, who restored Harrods to private family ownership.

In March 1912 Harrods was a target of window-smashing in the campaign by the suffragettes to get the vote for women. Emmeline Pankhurst founded the Women’s Social and Political Union (WSPU), in 1903 in Manchester. The Union used direct action in their campaign, beginning with acts of civil disobedience and escalating to criminal damage, arson and bomb attacks on empty buildings. Pankhurst famously stated that ‘the argument of the broken pane of glass is the most valuable argument in modern politics’, and private property was targeted as a way of bringing the cause to public prominence. Harrods, along with numerous other shops with large, plate-glass windows in London’s west end, was targeted in a synchronised series of attacks. Liverpool-based Doctors Alice JSS Ker and Alice Davis were charged with the offence and sentenced to three months in Holloway Prison. The motif of shop windows broken by suffragette’s stones and toffee-hammers is one of the most resonant of the campaign.