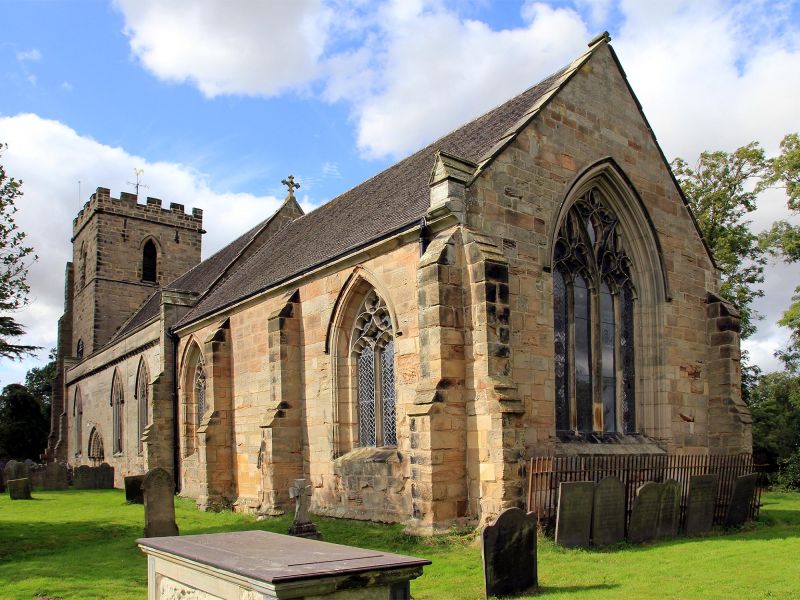 Church. Early C14 but heavily restored circa 1841. Ashlar; plain tile
roofs with stone coped verges. West tower, 4-bay nave, 3-bay chancel
with vestry. West tower: 3 stages marked by offsets; angle
buttresses, parapet string and crenellated parapet with moulded coping
stones to merlons and crenels. Pointed west entrance with wave-moulded
surround and old nail studded door. Pointed west window above with
Y- tracery and wave-moulded surround. High up above this is a seated
figure within a niche with a crocketed canopy. The nave has buttresses
at the corners and a corbel course beneath a plain parapet with moulded
coping. The south doorway is entirely C19 and has 2 orders of columns
with moulded caps, ball flower ornament around the pointed arch, and a
hood mould. Blocked north doorway with 2 orders of concave
quarter-round mouldings and an ogee-moulded hood. North and south
windows of 2 lights with Decorated tracery. Chancel: buttresses at
the bay divisions; south door with 2-centred drop arch and a double
ogee-moulded surround, though this latter is probably a
misinterpretation of the original moulding, parts of which survive in a
decayed state. 2-light side windows and 4-light east window, all with
flowing tracery and wave-moulded surrounds. Interior: High pointed
chancel arch of 2 chamfered orders without capitals; similar tower
arch, the lower part now blocked and plastered over. Arch-braced
hammer-beam roof over nave and arch-braced collar roof over chancel.
Fixtures and fittings: The upper part of the tower arch remains open
and gives access to an early C19 west gallery within which is a Gothic
style barrel organ, built in 1819 by James Butler.
C19 stone front with quatrefoil section pedestal surrounded by a series
of detached shafts supporting a circular basin with arcaded sides
incorporating blank shields. Full set of C19 box pews with poppy-heads
on the bench ends. Hexagonal pulpit contemporary with the pews. C19
choir stalls also with poppy heads. In the chancel are sedilia with
cinquefoil arches and a trefoil-headed aumbry. C19 armorial glass by
Warrington in the 2 outer lights of the east window, the centre light
has the figures of Sts. Mark and Luke. B.O.E. p. 335.