A Grade I Listed Building in Hungarton, Leicestershire 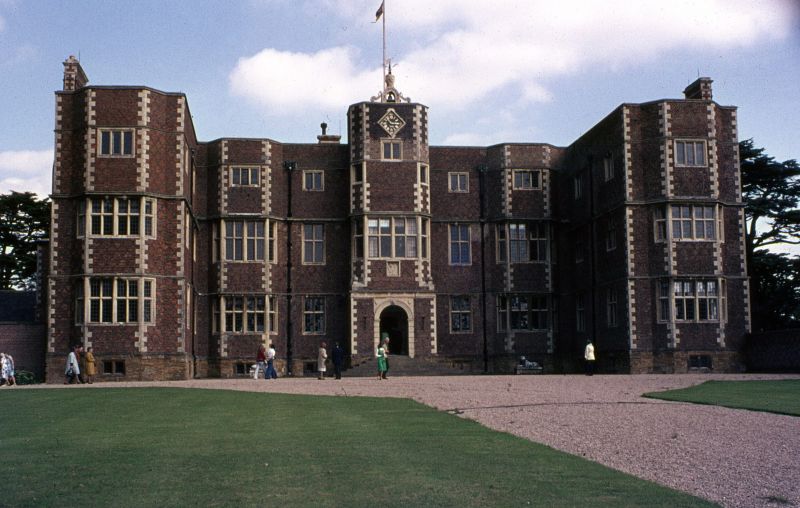 Mansion. c1615 - 30, dated 1621 and 1630, possibly raised slightly later
C18, and with some restoration c1905. Restoration by G. Bodley and J.A. Gotch.
Red brick diapered with dark blue brick on W front, and with stone plinth,
quoins, dressings, moulded bands, and parapetted bitumen roofs with brick
and stone stacks, some projecting. H plan with entrance front of c36m. 3
storeys and basement of 11 stone mullion and transom windows, including 5
full-height canted bays. From left : 6-light canted bay; 2 2-lights on wing
inner return; 6-light canted bay; 2-light; 10-light canted bay; 2-light;
6-light canted bay; 2 2-lights on wing inner return and 6-light canted bay.
Similar windows on ground floor. Central rectangular porch supporting bay
above. Stone doorway with moulded rounded arch and rusticated jambs. 2-leaved
panelled door up wide flight of stone steps. Above doorway an entablature
running round porch and where bay becomes canted a stone pedestal and ball
on the angle. Stone tablet over with coat of arms of Ashby family and inscription referring to 6 Chas. (1630). 2-light windows in basement, some blocked. On 2nd floor 3-light windows on bay fronts, otherwise 2-lights except for central bay which is higher than rest. Here a 1-light on the canting and a 2-light a 1/2 storey above. Clock face in diamond shaped frame over, and above the
parapet a C19 stone bellcote and bell. Front to right, shorter and without
bays. Rear front similar to entrance front. Fine interior. Hall with screens
passage, the wooden screen decorated with columns and rusticated arches.
Fireplace has C18 pediment with arms of de Lisle, brought from Garendon Hall,
Loughborough. Early C17 panelling in Brown Parlour. Carving includes tiers
of blank arches. Said to have been brought in in later C18. Stone fireplace.
Rich plaster ceiling in Library. Oak well staircase with turned balusters.
Great Parlour, now ballroom, has magnificent fireplace for a century in Hall
below but restored to original position by Gotch. Columns, pilasters, grotesques,
strapwork and central coat of arms. Early C20 ceiling and C17 panelling brought
in from other rooms. Further rich plasterwork friezes in other rooms, together
with panelling and overmantels. In Library a stone fireplace by Edward Welby Pugin of 1864, and brought from Garendon Hall. In Sitting Room a later C18 carved
marble fireplace. Further oak staircase with turned balusters. In Dining Room
windows are stained glass panels with arms of Ashby and allied families.
Quenby was built for George Ashby and is dated on a rainwater head 1621.
The Ashbys and decendants owned the estate from C13 to 1904. Recently it
has become the seat of the de Lisle family, formerly of Garendon Hall, Nr.
Loughborough. Stilton cheese was first made at Quenby. "Quenby Hall is the
most important house in the Elizabethan - Jacobean style in the county," Pevsner.
Quenby Hall guide book, Derby, 1977, and Pevsner, where pl.32 shows front.