A Grade I Listed Building in Upton Grey, Hampshire 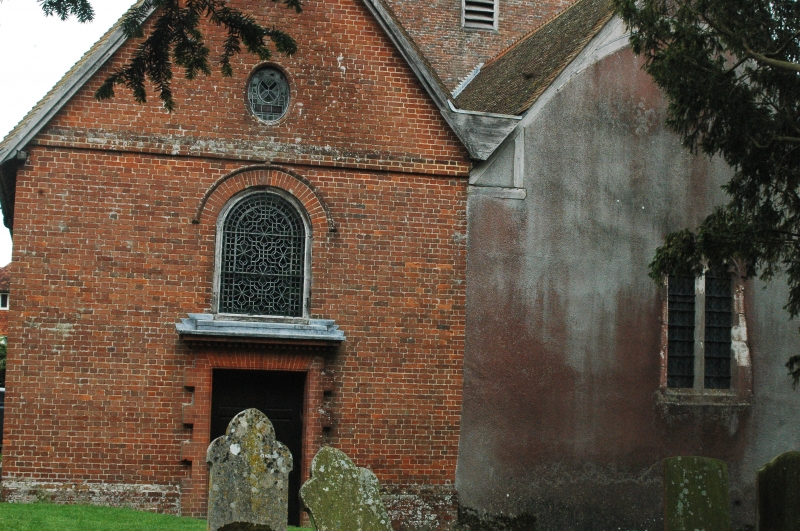 I
C12, C13, 1690, 1715, C19. Norman nave (with evidence of a south aisle which was later demolished) and chancel (now the base of the tower) with Early English added east end (now chancel) and north (Hoddington) aisle of 1715. The nave has a Perpendicular 2-light west window, but the 2 on the south side correspond to those of the north aisle (2 on the north, one west, one east), which are round-headed; the former Norman chancel arch (west tower arch) has 2 rows of billets. The north aisle, slightly larger than the nave, is at a higher level and is separated from the nave by 3 arches on octagonal columns. The present tower base has a Perpendicular 2-light window on the north side, and on the east side there is an Early English arch which is part of the later chancel construction; the chancel has 2 original lancets on each side and the east window has coupled lancets beneath a 4-cusped roundel; a piscina and sedilia is on the south side
and in the walls are the ends of a beam which probably carried a rood. Leading from the chancel on the south side and mainly attached to the tower is a Victorian Vestry. The interior is rich in memorials, with several C18 wall tablets with baroque ornament, many plainer smaller early C19 tablets, a good wall tablet of 1650 with a bust of Dorothy Eyre, and many C18 floor slabs. The west wall has 3 inscribed consecration crosses, there is a Perpendicular font, an open timber roof of 1680, anC18 chandelier and some Gothic style panelling. Externally the roofing is in red tiling, the main walls rendered with stone dressings, the north aisle in red brickwork English bond with a plinth and a west door in brickwork with a cornice above rusticated quoins. The upper part of the tower is in red brickwork, Flemish bond, with blue headers marking large figures with the date 1690 (on the east face), and a plain parapet. A small south porch has a gabled tile roof, a cusped bargeboard, and a timber frame fitted with
stonework.