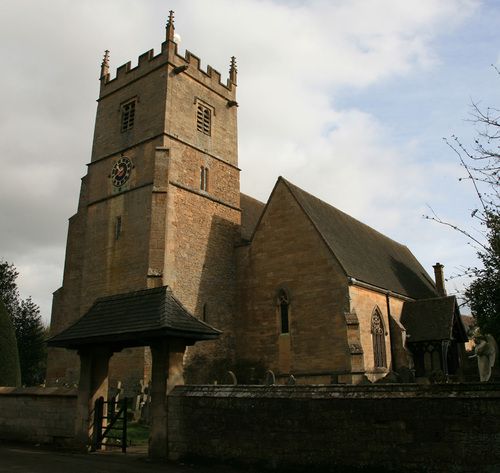 Parish church. Early C13, altered and extended in C14 and C15, rebuilt
(except for the west tower) from 1846 - 50, by R C Carpenter for Thomas
Thorp, Archdeacon of Bristol. The tower was restored in 1879. Part lime-
stone rubble with ashlar dressings, part limestone ashlar with plain tiled
roofs. West tower, four-bay aisled nave with opposing doorways and south
porch and two-bay chancel with south vestry. Decorated style. West tower:
three stages with chamfered plinth and strings; two lower stages are early
C18, belfry stage and diagonal west corner buttresses with offsets added
late C15. Lower stage has a 2-light west window which has round-headed lights,
a square head and a hoodmould with returns; above it is a small rectangular
light and there are lancets in the north and south elevations. The second
stage has a west clockface and 2-light windows (with round-headed lights)
to the north and south. The belfry stage has 2-light louvred bell chamber
openings with square heads and hoodmoulds, an embattled parapet with crocketted
corner pinnacles-and a tall weathervane. Nave: aisles have separate gabled
roofs, chamfered plinths and moulded eaves cornices enriched with grotesque
beasts' heads and foliated detail. The north aisle has a diagonal west corner
buttress with offsets and two other buttresses on its north side. The west
end window and the three north windows are of two lights and have hoodmoulds
with human head stops. The north doorway is of three moulded orders, has a
hoodmould with foliated stops and an additional pointed moulding above. The
large east end window is of three lights and similarly detailed to the rest.
The south aisle has a diagonal corner buttress and three other buttresses on
its south side and also a sill string. There is a cusped lancet with a hood-
mould and beast head stops at the west end, three windows of three lights with
human head stops to each hoodmould in the south elevation and a 5-light east
window with returns to its hoodmould. The south porch is gabled and timber-
framed on an ashlar base. It has scalloped bargeboards and a pointed archway
flanked by cusped pointed open panels with a pair of similar 2-light panels
each side. The panels were glazed in 1980. The south doorway within is of
three orders, the central order of which is shafted and has a hoodmould with
human head stops. The chancel has a gable-end parapet with a cross finial,
a similar moulded eaves cornice to that of the aisles with a ballflower frieze
beneath it, and the sill string is continued around it from the south aisle
but at a lower level. There are diagonal east end buttresses with offsets
and a central south buttress. The 4-light east window has a hoodmould with
human head stops. At the western end of the north elevation is a 2-light
window which has a hoodmould with returns. The south elevation has two similar
windows, cusped lancet with human head stops to the hoodmould and also a pointed
doorway. The north vestry is gabled and has a chamfered doorway and a cinque-
foil light at its east end and a pair of cusped lancets in its east side eleva-
tion. Interior: four-bay pointed nave arcades of two orders on columns of
quatrefoil section. The chancel arch is similarly detailed but the tower arch
is of simpler design. Nave has an arch-braced collar truss roof with large
paired wind-braces and a ballflower frieze at wall-plate level. The chancel
has a painted barrel roof and painted and gilded nookshafts to the east and
south-east window. The reredos and piscina are also painted and the south-east
window sill is stepped to form a sedilia. The octagonal stone font and timber
pulpit are ornately carved, there is a large Parish chest in the south aisle
and at the nave crossing hangs a corona by Hardman. Memorials: in the north
wall of the chancel is a tomb recess with a marble mosaic memorial to Thomas
Thorp, died 1877. Also early C19 memorial to Anna Parsons and numerous C18 and
C19 ledger slabs in the north aisle. Glass: the chancel glass is by Willement;
also some glass by Hardman in the north aisle. The rebuilding of the medieval
church was highly controversial particularly as Thorp supported the Oxford
Movement and established a high-church tradition at Kemerton. (VCH, Vol 8,
p 218-9 (Glos); BoE, p 202).