Church of Our Lady

A Grade I Listed Building in Warnford, Southampton, Hampshire 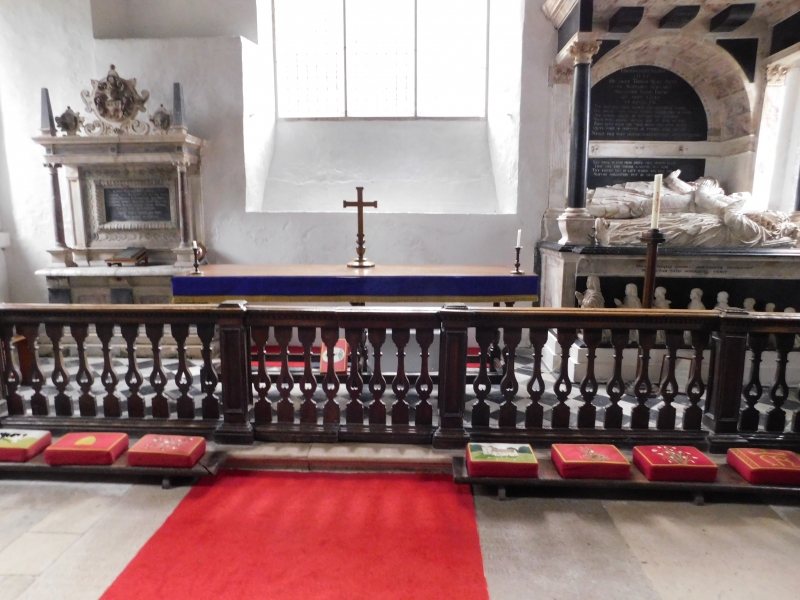 Entry Name: Church of Our Lady

SU 62 SW WARNFORD WARNFORD PARK
4/10 Church of Our Lady
6.3.67 (formerly listed as
The Church)
I
Parish church. Of Saxon origin, Norman west tower of c1130, Early English single-
cell nave and chancel of c1190, Decorated east window of 1377, minor restorations
of 1906. Walls of flint with stone dressings, north, east and part of south walls
cement rendered, tower of stone but mainly cement rendered. Tile roof. The massive
square tower has three stages, flat corner buttresses, roundel openings at the top,
narrow central windows to each stage, and a C18 brick parapet with stone coping.
The nave has a regular series of lancets at each side and the east window is a
fine example of Curvilinear tracery: some later buttresses have been added.
Early English south porch (a former north porch now missing). The interior is a
fine open hall, with a roof of 1906 (retaining some old tie-beams). On the north
side there is the entry to a rood stair, in the centre, at the rear, is a Purbeck
font (c1130) on a drum with four corner columns. The oak panelling (of C17 & C18)
which formerly enclosed the squire's pew is re-used as a background to a C17 altar
table, at the west end. There is a screen of 1634 within the tower arch, supporting
a Victorian Gothic retable panel, containing the Prescriptions. There is a fine
screen between nave and chancel of 1634, with interlaced arcading on balusters
above a panelled base: the altar rails are late C17. Dado panelling in the chancel
seems to be the remains of a medieval screen: there are old bench ends in the nave:
Jacobean pulpit. On the north wall of the nave are two hatchments and a Royal
Coat of Arms of G.IV(1821). Against the east wall are set two fine altar tombs,
on the north side of William Neale (d.1601) and at the south side a more elaborate
monument to his son Sir Thomas Neale (d.1621) containing his effigy and those of
his two wives. Inscriptions refer to the renovation (i.e. rebuilding) of the
Saxon church by Adam de Port, holder of the manor 1171-1213.