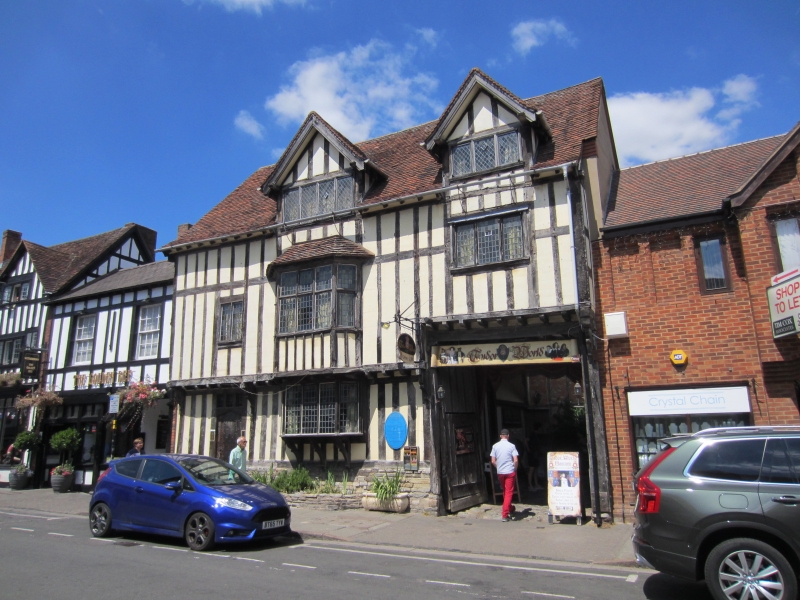 Yeoman's house, with rear outbuildings now shop. Front range
probably rebuilt on old plan after 1614 fire, outbuildings
rebuilt after 1595 fire; restored 1908, 1947 by F Yorke and
1979 by SA Wright. Timber-frame with plaster infill on coursed
rubble plinth; tile roof with brick rear stack.
2 storeys with attic; 3 irregular bays; 1st floor jettied on
carved brackets.Entrance to left end is a later feature,
triangular head with leaded lights above and studded door with
strap hinges and enriched iron handle; 1st floor raised over
large carriage entrance to right end which has paired battened
plank doors. Ground floor has 1:3:1-light canted oriel,
originally bay window; similar oriel above has hipped roof,
3-light window to right and inserted 1908 two-light window to
left; attic has 1947 large and small gabled dormers with
windows of 4 and 3 lights. Close-studded framing. Rear has
short gabled wing with stack to left of ridge and entrance
with battened door.
Lower 2-storey outbuilding range has brick and plaster infill;
mostly 3-light windows, some with wooden diamond mullions
originally unglazed, and varied entrances. Square framing.
INTERIOR: well preserved with C17 staircase with splat
balusters and square newels with finials; stud partitions and
ex-situ panelling and doors brought from another house c1947.
HISTORICAL NOTE: the house belonged to the Guild of Holy
Cross, later to the Corporation; it became known in the C20 as
the Shrieve's House from its 1st recorded tenent, William
Sheryve, 1542; also inhabited by William Rogers, a Sergeant at
the Mace, for whom the house was rebuilt and enlarged after
the fire of 1595, and John Woolmer, the 1st Mayor of
Stratford, 1664. A good example of a late C16 or early C17
yeoman's house retaining its range of outbuildings.
(Bearman R: Stratford-upon-Avon: A History of its Streets and
Buildings: Nelson: 1988-: 51; Stratford-upon-Avon Papers: Ree
P: The Shrieve's House, Stratford-upon-Avon:
Stratford-upon-Avon: 1987-).