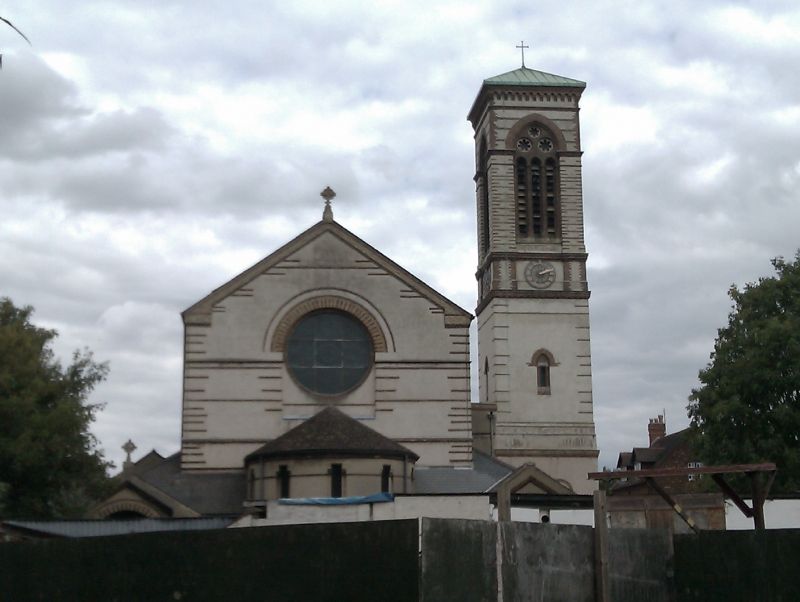 PLAN: a clerestoried nave, five-bay north and south aisles, a sanctuary with a semi-circular apse, a west end baptistry apse, north-east Lady Chapel, south-east war memorial chapel, south-east campanile with a vestry block off the west side, and a south-west porch with west and south doors.

EXTERIOR: the style is Italianate Romanesque, in complete contrast to the prevalent Gothic style of church-building in the 1860s. The other fundamental characteristic of the exterior is the use of cement rendering for the facing. This is decorated with narrow brick banding and polychrome red and yellow brick arches to the openings. The sanctuary is blind with a corbelled brick cornice and is ornamented with three brick crosses. The nave has tall, round-headed clerestory windows and brick string-courses. To the aisles there are low lean-to roofs and small two-light square-headed windows, each with a central column with moulded capital and base. The blind east wall and gable of the north-east Lady Chapel projects east beyond the end of the sanctuary apse. The north elevation of the Lady Chapel has brick banding and seven windows: three pairs of round-headed windows and a one-light window to the west. A smaller apsidal chapel, St George's Chapel, built in 1919, projects from the east end of the south aisle. The west end baptistry has recessed windows with stepped detail to the jambs. Above there is a large oculus in the nave west wall. The campanile has three stages demarcated by brick banding. Its lowest stage has narrow paired one-light windows with brick relieving arches. The next stage has square-headed one-light windows to each face recessed under round-headed brick arches. The S face has a pair of double doors in a round-headed arch under a gable, giving access to the upper floors of the campanile. In the belfry stage there are very large three-light louvres with three cusped circles in each of the heads. The clock faces below the belfry stage are framed by paired brick pilasters. Capping the campanile is a low pyramidal roof. At the south-west corner of the building the south porch wraps it and is a continuation of the south aisle. The south doorway has corbelled detailing to the jambs and an outer door with good strap hinges. Above the lintel, the wall is pierced with three openings for an overlight. There is a more elaborate doorway to the west with a polychromatic round-headed arch recessed under a corbelled gable; this is balanced by an identical doorway at the north end of the west elevation, though the porch or lobby to which it originally gave access was converted to a chapel (the Holy Cross Chapel) in 1912.

INTERIOR: the interior is brightly lit and has simple lines and its effect comes from the rich decoration which is but a part of what was intended. Unlike Gothic church plans of the time, the chancel forms part of the main body of the building with the stepped-up choir projecting as a separate structure to the west of a tall polychromatic arch. The area of the choir is defined by low walls on three sides with inlaid marble panels and by a large cross hanging above; decorative iron railings were removed in 1940 to assist with the war effort, at which time the gates on the north and south sides were also removed, and those to the west cut down to the level of the walls. Either side of the chancel arch the wall is gilded and painted with the emblems of the Evangelists. The arcades, both north and south, are of six bays with round, unstepped arches with cylindrical stone piers with broad waterleaf capitals with some figure carving: the bases rest on brick plinths. The arch to the west baptistry is round too, the responds having waterleaf capitals with some figure carvings. The west oculus is recessed behind a round-headed arch. Covering the nave is a tie-beam and king-post roof with broad arch-braces to the collar. Three pairs of purlins divide the roof into panels which are richly decorated with sun-burst motifs. In the aisles the lean-to roofs are plainer but are also painted. The flat, boarded roof to the baptistry is also painted. In the east apse the roof is painted with a large gilded figure of Christ in Majesty above a wall frieze of the Apostles and a depiction of the Lamb of God behind the altar, the work of Heaton, Butler and Bayne to Blomfield's design, dating from 1868-9; the scheme has since undergone repainting a number of times, including the gilding of some areas in 1893. On the north wall of the nave, between the clerestory windows, are figurative panels of glass 'opus sectile' by James Powell and Sons. The scheme, which includes the tiled Te Deum frieze below, punctuated by cherub medallions in opus sectile, as well the patterned tiles to the spandrels of the arches and above the springing of the clerestory windows, was paid for by public subscription and erected in sections between 1905/6 and 1911. The south and west walls of the nave and the Lady Chapel are decorated with brick string-courses. The steps to the sanctuary are of rendered concrete and tile, the choir floor being tiled. In the nave the flooring is of wood blocks, laid in 1889/90 and replaced in 2004/5. The original floor was of hard Portland cement, relieved by a few lines of tiles, beneath which was a heating system.

PRINCIPAL FIXTURES: over the altar, which has three inlaid marble panels, there is an elaborate baldacchino with cusped arches and crocketed gables. In the Lady Chapel the altar is gilded and painted. The polygonal pulpit and tester of 1887 form an outstanding piece of neo-C17 work with the painting and gilding being the work of Heaton, Butler and Bayne. The font is a square bowl decorated with roundels on a squat cylindrical base with marble corner shafts with waterleaf capitals and bases. The gilded font cover is in the shape of a domed baldacchino, dedicated to Herbert Moore, d1942. The south-east chapel, dedicated to St George as a war memorial chapel in 1920, is divided from the aisle by a three-bay classical arcade of polished marble columns and a low iron and timber screen with gates. It has a fine green and white marble altar. The nave is seated with wooden chairs.

The Church of St Barnabas is one of the most interesting and unusual churches from the great era of church-building in the mid-C19. It was designed to provide a place of Anglican worship in the poor area of Jericho and was built at the expense of Thomas Combe, superintendent of the Clarendon Press, a strong Anglo-Catholic and an early patron of the Pre-Raphaelites. He stipulated that at the church there should be 'strength, solidity and thoroughly sound construction' but that 'not a penny was to be thrown away on external appearance and decoration'. Internal embellishment was to be added gradually. His architect, Arthur Blomfield, one of the most active and successful church architects of the Gothic Revival, responded to the challenge and initially proposed to build the whole church of concrete (then a very new and experimental material which was being tried out in a number of places) but elected for rubble walls faced with cement.

Arthur William Blomfield (1829-99), who was the fourth son of Bishop Charles J Blomfield of London (Bishop 1828-56), was articled to P C Hardwick and began independent practice in 1856 in London. His early work is characterised by a strong muscular quality and the use of structural polychrome often with continental influences. He became diocesan architect to Winchester, hence a large number of church-building commissions throughout the diocese. He was also architect to the Bank of England from 1883. Blomfield was knighted in 1889 and was awarded the RIBA's Royal Gold Medal in 1891.

The choice of the Italianate Romanesque style for St Barnabas was most unusual at a time when Gothic was overwhelmingly the norm for church building; indeed, non-Gothic Anglican churches would remain extremely rare for the rest of the C19. The early Basilican model suited both Combe and Blomfield: as well as being a form well suited to Tractarian ritual, the spacious plan provided the required capacity, and the Italianate style allowed for an exterior which was relatively unadorned, yet dignified. The objective was to provide a place of worship that could be embellished over time, but although significant internal decoration has been added, the founder’s intentions have never been fully realised. The use of a west baptistry in the late 1860s is quite unusual and is a feature that was promoted by Blomfield in his early work. The baldacchino is a rarity and is an Anglo-Catholic feature that attracted much hostility circa 1870 from those suspicious of Romanising tendencies in the Church of England.

The Church of St Barnabas, Oxford, is listed at Grade I for the following principal reasons:
* Architectural interest: as a building of outstanding importance in the history of church building in the C19 and whose use of Italianate Romanesque is unparalleled at the time in Anglican church-building;
* Architect: as a major work by a leading church architect of the C19;
* Technological interest: for its innovative methods of construction, including the use of cement and concrete;
* Interior and degree of survival: for its internal decorative work of outstanding significance, enhanced by its little-altered condition;
* Historic interest: the church is an important monument to the influence of the Oxford Movement in the city where that movement began.