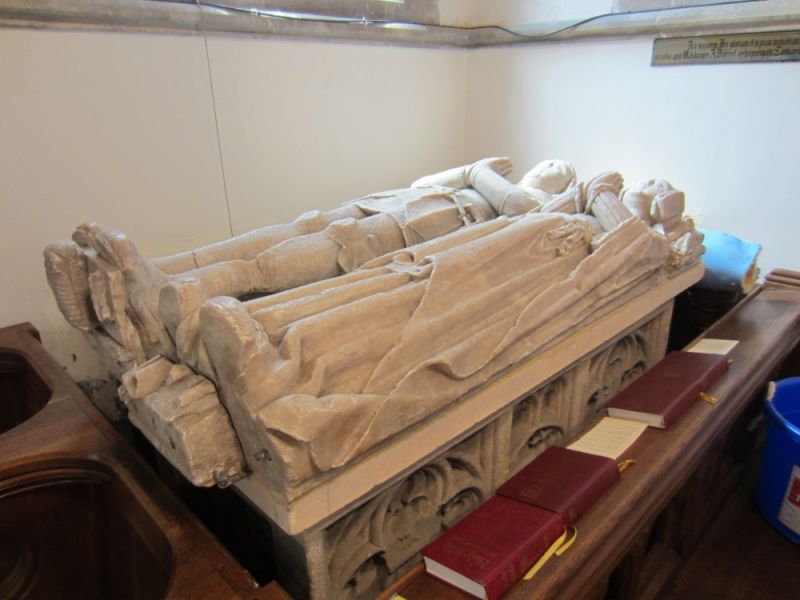 Early C16, 1869. A medieval church rebuilt by Archbishop Warham in the early C16, and again by T H Wyatt in 1869, when the chancel was rebuilt, the north aisle added, and the tower virtually rebuilt. The chancel has north and south 'chapels' at its western half, separated by 2 moulded pointed arches resting on short coupled marble columns, with Decorated floral caps and moulded bases; there is a small piscina on each side in the eastern half, and a lancet above a sedilia on the south side; the chancel arch is stepped and fully-moulded, resting on decorated brackets on either side of a short marble column on a bracket. The south aisle has the form of its C16 addition to the original church, with 3 coupled windows, a canopied tomb with a brass (of Robert Warham and his wife), and at the west end a detached altar tomb with 2 recumbent alabaster figures (a Knight and Lady of circa 1520); the 2 arches are unequal, the western being
pointed (transitional) on round columns with cushion caps, the other (Perpendicular)having a ½-hexagon form with recessed cusped panels. The north aisle is plain with south aisle features, and 2 equal pointed arches on circular columns with moulded caps and bases. The tower arch is C15 and also the west door. The pulpit is of coloured stonework and the font is a 'Norman Revival' massive structure. The chancel ceiling is panelled and the nave has exposed timbers with arch braces and short hammer beams.
Externally, the roofing is of steep red tiling. The walling is flint with stone
dressings, the aisles having parapets and buttresses. The prominent tower has a
Perpendicular style, a tall octagonal staircase, stepped diagonal buttresses and a crenellated parapet, all of the restoration period. A Victorian church of orthodox form with a finely-detailed finish.