A Grade I Listed Building in Evesham, Worcestershire 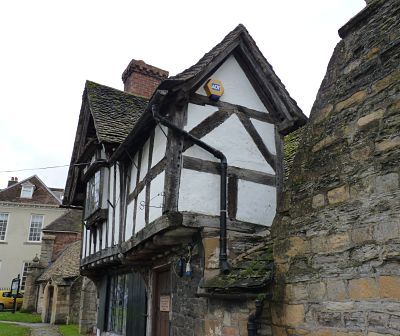 Church of England Parish: Evesham All Saints with St Lawrence

MERSTOW GREEN
1.
5249
(East Side)
Almonry
SP 0343 NE 1/232 7.5.52.
I GV
2.
C15 and earlier building of the Benedictine Abbey. Partly rubble, partly timber
frame. The left-hand portion of rubble and probably of C14 origin, has buttresses
at sides, gable, and a C17 4-light mullioned window with hood mould. Centre has
rubble base with close-set timber framing above, 5-light wood mullioned window
having leaded lights, and 2 windows in chamfered reveals. Right-hand bay timber-framed,
with oversailing upper storey and gable with carved barge-boards; also a 3-light
oriel with renewed leaded lights. Cotswold stone roof. The building well restored
throughout and now The Almonry Museum containing items of local and rural interest
and numerous relics of the Abbey.

Nos 53 and 54 incorporating Remains of Abbey Gate, Gate and railings of No 53,
Remains of Abbey Stables, the Almonry and The Stocks, together with No 1 and
No 3 and Remains of south wall of Abbey Precinct, Little Abbey Lane, form a group
with Church of All Saints, Church of St Lawrence, The Bell Tower, Abbot Reginald's
Wall and The Porter's Lodge, Remains of west wall of North Transept of Abbey,
Archway to south of the Remains of the west wall of the North Transept of Abbey,
Abbot Reginald's Gateway and The Old Vicarage, the Public Library, Nos 6 and 6A,
Nos 7 and 8 and Walker Hall, Market Place.