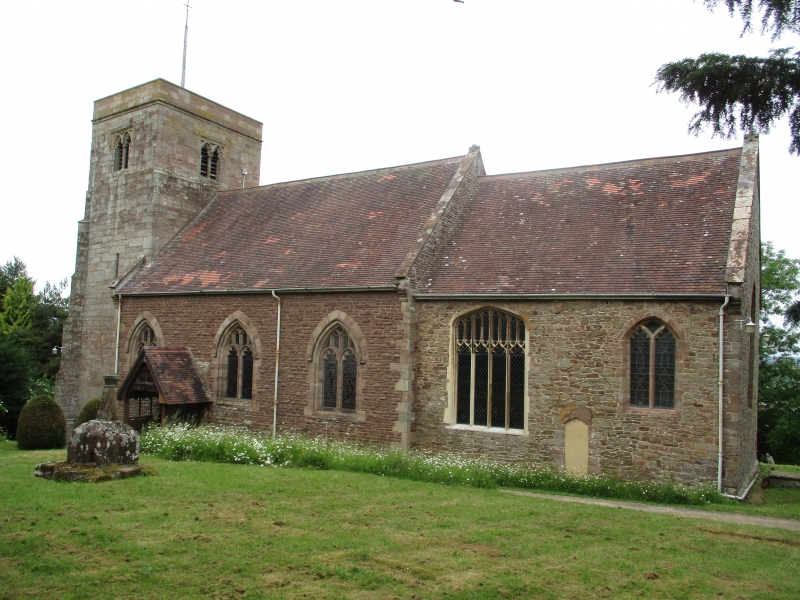 Parish church. Mainly C12 nave and chancel, C16 tower, north arcade and
aisle added 1836, the whole restored late C19 to early C20. Sandstone
rubble and sandstone dressings with tiled roofs. Three-bay nave, three-
bay chancel, west tower, north aisle and south porch. Nave has three
late Cl9 to early C20 Decorated style windows, the north aisle two, with
a re-set C12 blocked round-headed doorway to the east side containing
two scalloped capitals and a plain typanum. Chancel has two single-light
C12 windows with diapered heads in the north wall; the rest of the windows
restored C15: two with two cinquefoiled lights and Y-tracery opposite each
other in the eastern bay; 3-light east window; 4-light cinquefoiled window
on south side and to the east of it a blocked C16 Tudor-arch doorway.
Tower is C16 of three externally undivided stages, diagonal buttresses
to north-west and south-west, four twin (re-used?) bell-openings each with
cinquefoil heads separated by an octagonal-shaft, a 3-light late C19 to
early C20 west window under a 4-centred head and a C18 doorway in the south
wall. South porch is early C20 with ogee-shaped tie-beam to front. South
doorway is C12, round head, west capital similar to those on blocked north
doorway and the east capital depicting (in restored form?) a man and a horse.
Interior: barrel roofs; C12 chancel arch of two orders, the outer with
restored chevrons, capitals similar to those of north and south doorways
plus heads, patterned abaci; C13 or C14 piscina in chancel has 2-centred
head and chamfers, above it in the east window of the south side are frag-
ments of medieval stained glass including a crowned Virgin, probably C15;
heads of C12 north windows in chancel have strange drilled holes, beneath
them a C14 effigy of a woman set in a gabled crocketted ogee-headed recess
decorated with ball-flowers and dog-teeth. North aisle separated from
nave by two C19 arches with four centres supported on an octagonal pier.
C16 tower-arch is 2-centred with crenellated imposts; in the south-west
corner of the tower a tapered stone coffin-lid with incised plain cross
from each arm of which hangs a ring. C14 font has octagonal bowl with
cusped panels supported on eight fillet-moulded shafts. Pulpit is C19,
4-sided, supported on octagonal shaft, with top rail cresting, ogee and
quatrefoil decoration to the panels. In 1931 an excavation revealed that
the church had until C15 alterations, a chancel-apse. (RCHM Vol II, p 182-3).