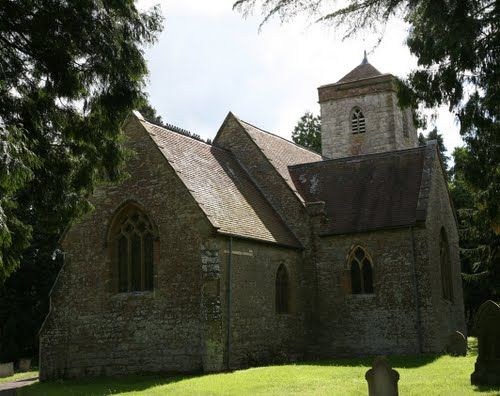 Church. C14, restored 1877. Stone rubble with tile roofs. Comprises
a west tower, nave, lower chancel, north and south transepts, and south
porch. The tower has diagonal buttresses, and a pyramid roof behind solid
parapets. The bell openings are each of two trefoiled lights with a quatre-
foil below a pointed head. The west window is similar. The north wall of
the nave has three windows each of two trefoiled ogee lights under a pointed
head with quatrefoil. Between the second and third windows is a blocked door-
way with Tudor-arched head. The south wall of the nave is similar, with a
doorway between the first and second windows. This is chamfered in two
orders under a C19 open timber porch. The north and south windows of the
transepts are both C19 and of three trefoiled lights with reticulated tracery.
The south wall of the chancel has a trefoield window at the left, one of two
trefoiled lights with Y-tracery, and a pointed doorway between them. All
are C19. In the north wall is a window of two trefoiled lights with an opening
in the head. The east window is C19, of three lights with reticulated tracery.
Interior: tower arch is pointed and chamfered in two orders. The nave roof is
C19 and has rafters with collars and slim arch-braced king-post trusses. The
pointed chancel arch is C19 and has moulded corbels as responds. The transept
arches, also pointed and C19, are chamfered in two orders and have foliated
capitals as responds. The font is probably c1200 and has a round bowl on a
base with chamfered plinth. The bench ends incorporate some blind tracery
carving. In the upper lights of the windows are some fragments of late-medieval
heraldic glass. More fragments were re-assembled in the south-east chancel
window in 1940. In the east wall of the south transept is a tablet carved
with a shield of arms and date "1572". Below it is a tomb chest of c1500.
The top has a matrix for a brass and the sides have panels carved with kneel-
ing figures and with the remains of painting. On the north side of the chancel
is a large marble monument to Admiral William Caldwell, who died at Birtsmorton
Court in 1718. His semi-reclining effigy rests on a tomb chest carved with his
flagship. The reredos background is carved with 28 navigational instruments
and is topped by flaming lamps and a cartouche with military trophies.