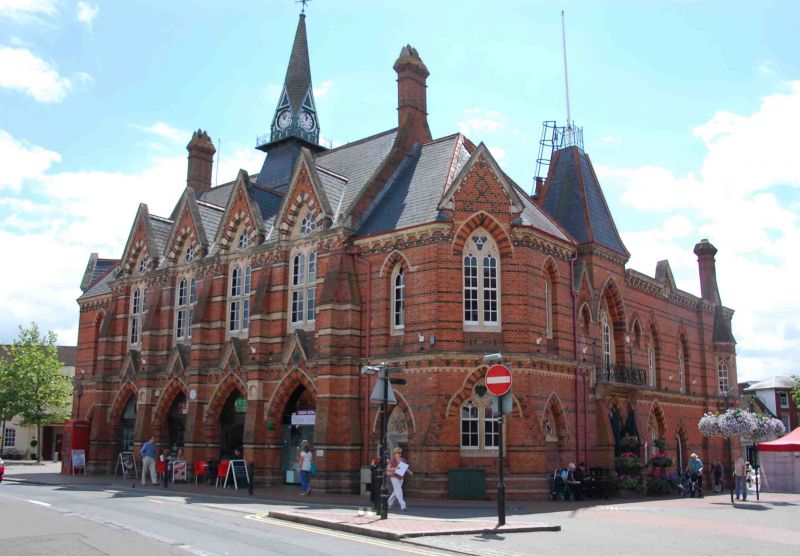 PLAN: Triangular plan on island site with two-storey-plus-attic main range to north, lower wings extending to the south on each side and continuing to wide one-storey apse that encloses the rear yard. Main range with hall, council chamber and ancillary rooms to first floor, and four shops at ground floor.

INTERIOR: Main range has first floor hall of four bays with elaborate chamfered hammer-beam truss roof with carved stone corbel blocks and shields painted with coats-of-arms of past and present High Stewards of Wokingham. Wide carved stone fireplace to centre of west wall. Smaller stone fireplace in outside wall to northeast corner. At east end, a tall pointed arch with wooden panelled sliding doors to War Memorial room, with wooden carved and moulded memorial on east wall and stone fireplace in corner. At west end, a small council chamber with a band of wooden panelling carved with names of past mayors. Corridor running east-west along the hall to balconies at opposite ends. Town council office with oriel window and fireplace. Mayor's parlour at ground floor in former police superintendent's chamber. Two prison cells with barred iron doors and locks.

HISTORY: The Town Hall stands on the site of the Medieval Guildhall, which was demolished in 1858. The new Town Hall was opened on June 6, 1860 by Lord Braybrooke. It was funded in part by money available for a new County Police Station, and the building jointly housed the police until 1905 when the new police station was built. Two of the original three prison cells survive. In 1877, the Fire Brigade housed a horse-drawn fire engine in the covered market, and this use continued until 1969 when the fire station was built. The building also housed a covered market under the arches, which are now used as individual shops.

Group value with the listed buildings around the perimeter of the site and the dated 1881 Drinking Fountain (q.v.) and K6 Telephone Kiosk (q.v.) immediately adjacent to the Town Hall.