A Grade I Listed Building in Bisham, Windsor and Maidenhead 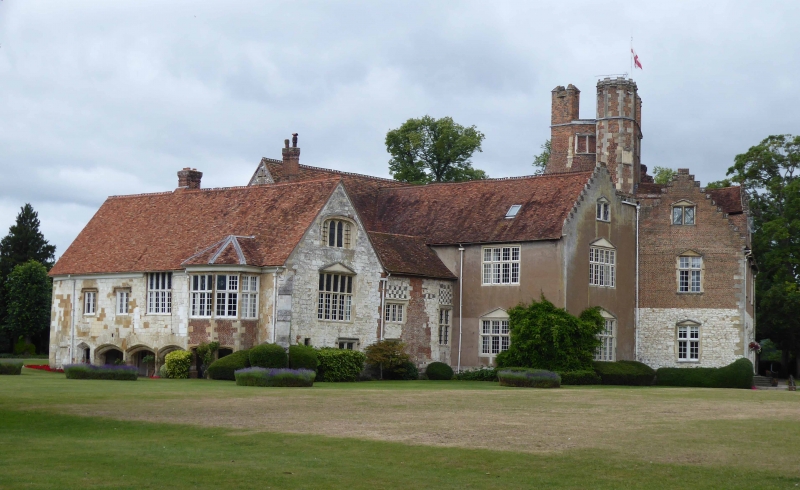 Preceptory of the Knights Templar, now the Bisham Abbey National Sports Centre. C13, altered and extended C14, and largely rebuilt in C16, altered and extended C17. Minor restorations in 1859, altered mid C20. Part brick, part rendered, part chalk, part chalk with knapped flint; some exposed timber frame on west. Several old tile gabled roofs. Roughly four main blocks; the first runs east and west and faces due north; the second is connected at its west end to the first block and runs in a south-easterly direction; the third is a continuation of the second and contains the great hall and screens passage; the fourth runs north-east at right angles to the hall. At the south-east corner of the northern range and rising above it is a tower. Mostly two storeys, but part two storeys and attic.

Tower: built 1560, brick with stone quoins and dressings. Irregular, windows mostly blocked but some two-light casements remain. At the north-east is an octagonal turret, finishing in an embattled parapet, and at the opposite corner, a large chimney-stack containing many chimneys. South-west or entrance front: centre part chalk, four bays, with a one bay gable at either end. Centre part has two brick gables with crow steps, and two large chimneys with diagonal shafts, offset heads and clay pots. Three C16 cross windows with pediments on first floor. On ground floor are three, three-light casements with pediments and on the left a C13 entrance porch with fine outer and inner doorways and a quadripartite ribbed vault. The doorways have colonettes and moulded arches, and the large planked inner door with its ironwork is original. Above the doorway is a small three-light casement and above it is an embattled brick parapet. The left gable of chequered chalk and flint is set back slightly and has a steeply pitched roof, a two-light cusped traceried window at the upper level, and a small two-light window with a two-centred arched head, below. The right gable is chalk and has a two-light leaded casement at attic level in a moulded frame. Below this is a five-light mullioned and transomed window with casements at the bottom level. On the ground floor, a small three-light casement on left with pediment, and a blocked arched opening on the right.

East front: coved eaves cornice. Four bays. On the right bay, a two-storey canted bay with hipped tile roof with large mullioned and transomed window on first floor, and three arched openings to ground floor. To the left of this on the first floor, two two-light casements with hoodmoulds and a large window in the third bay similar to that in the canted bay. On the ground floor of this section is a small, square-headed blocked opening on the left, and to the right one narrow and three wide arched openings with moulded heads which formed part of the former C14 cloisters. Two further arches run through behind the openings of the canted bays.

Interior: in the great hall the remains of a late C13 window of three lancet lights, now blocked, in the east wall; and a mid C16 stone fireplace with coupled Corinthian columns on either side, standing on enriched pedestals and supporting an entablature with a carved frieze. Above this, an early C17 oak overmantel, given by James I to Lord Windsor c.1605 for his house at Worcester, and when the house was sold, the eighth Earl of Plymouth presented it to Bisham Abbey. The screens and projecting gallery above are late C15, and the lower part of the hall wall is C17 panelling. In the screens passage are five blocked arches which originally went into the C13 kitchens. A good C18 staircase with moulded balusters to the north of the hall. Over the Great Chamber on the east side, built by Lord Montagu, c.1370, and now the Elizabethan Room, is an extremely fine collar purlin roof of five bays with moulded arched braces to collars, moulded crown posts braced four ways, and double side-purlins hollow chamfered and finely moulded.

The House was an abbey for only three years. Formerly a preceptory of the Templars, it became an Augustinian Priory in 1337, and in 1537 a Benedictine abbey. This was dissolved in 1540, and the estate granted to Sir Philip Hoby in 1553, who began to rebuild as did his half-brother who succeeded him. Much of this work was carried out between 1557 and 1562.