A Grade II Listed Building in Frampton on Severn, Gloucestershire 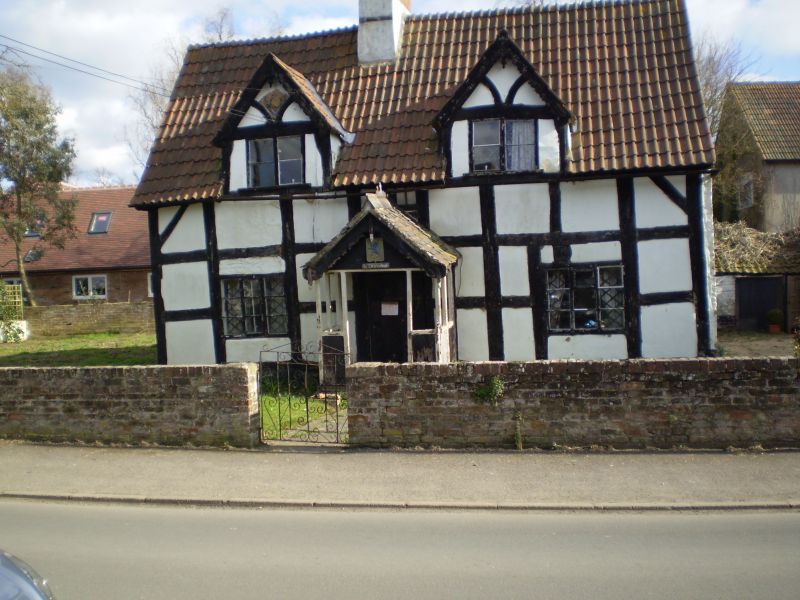 Find accommodation in
Frampton on Severn

the description shall be amended to read

Small house, now storage and study. Probably C15 and C18. Square panel timber frame
with brick nogging, some brickwork, including whole of back wall, double roman tile
roof. A two-part building, a cruck framed hall nearer road, to which hipped gable
extends, and a lower later extension at rear. To road is a C20 four-light casement,
principal front faces De Lacy Cottage (q.v.) across a narrow yard, has two 2-light and
one 3-light casement under two 2-light raking dormers in main building, and a further
casement and large dormer, each of these with close-set internal bars, in the left
extension which is in brick. Four plank doors. Brick stack near junction of two
parts. Back wall plain but for a high-set casement near street end.
Interior: two pairs of heavy full crucks, with some evidence of smoke blackening, high
collars, rough purlins; the hipped end to the street contains a framed wall section or
form of queen-post truss. Some early wide floor boards, remains of wattle and daub
infill to considerable internal framing. Ground floor centre room has two heavy beams
with bar stop; this assumed to be inserted floor. The stack at far end of main
building was inserted and has a smoking chamber attached, possibly associated with
Severn fishing. The added end space contains a made-up fireplace dated 1670 but with
flanking carved figures of St George and St Michael probably earlier: this came from
Highnam Court in Gloucestershire. Two-bay collar roof, and a longitudinal beam below
the ridge inserted, with hooks, when building used by butcher. The house believed to
have been the home of Wm De Mallett, falconer to Earl Clifford in 1460, more recently
the village smoke house.