A Grade I Listed Building in Wick Rissington, Gloucestershire 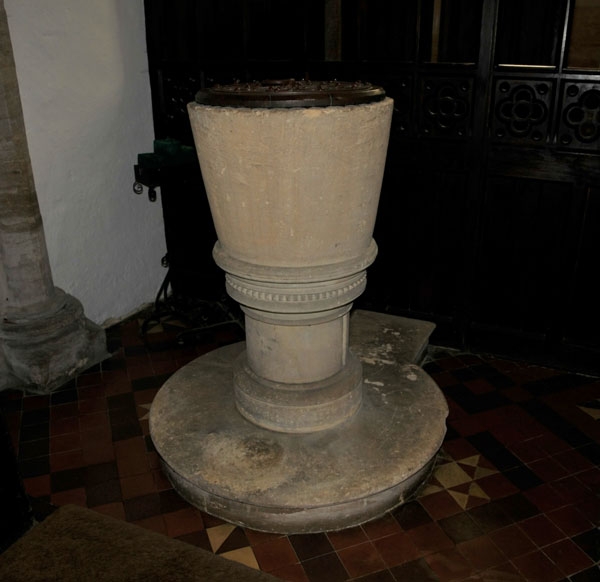 WICK RISSINGTON WYCK RISSINGTON VILLAGE
SP 12 SE
1/272 Church of St Laurence
25.8.60
GV I
Anglican parish church. C12, C13, C14, C15 restored by J. E. K.
Cults 1879 when the transepts were demolished and the south aisle
and porch were built. Nave and chancel, limestone rubble with
dressed stone quoins. North aisle; coursed squared and dressed
limestone. Tower ashlar. Nave with north aisle, porch at the
west end of the aisle. Part of the C12 corbel table visible on
the north and south sides of the nave. Nave south wall; two 2-
light and one 3-light windows with rectangular casement-moulded
surrounds, Perpendicular tracery (restored C19) and moulded stopped
hoods with carved head stops. The central window of the three
appears to lie within a blocked doorway and is probably entirely
C19. C14 style, C19 pointed window with moulded hood with early
stops far right within the blocking of the arch formerly opening
into the south transept. Chancel south wall; plinth with deep
flat chamfer. C13 lancet with moulded continuous dripmould and
continuous roll-moulded sill below. Narrow plank priest's door
with decorative hinges within a narrow C13 flat-chamfered basket-
headed surround with a segmental moulded hood lower right. C14
pointed 2-light window far left with a stopped hood, C15 two-light
window with a rectangular casement moulded surround with a moulded
hood with diamond shaped stops far right. Clasping 'gabled'
buttresses at the east end. Two pairs of tall thin lancets with
roll-moulded continuous sill below, single diamond-shaped lights
with concave sides above each pair of lancets. Continuous
dripmould continued over these in a series of steps. Single
diamond-shaped light towards the apex of the gable. North side of
chancel with 3 lancets with a continuous moulded hood and a
continuous sill below. North aisle; 3 pairs of lancets. Gabled
C19 porch at the west end with a pair of C19 double doors with
decorative hinges within a double-chamfered pointed surround.
Tower of four diminishing stages (the lower 2 stages being probably
of C13 date). Clasping 'gabled' buttresses on the west. Deep
plinth with 3 chamfered stages. C19 plank west door with
decorative strap hinges and a moulded stopped hood. Tall lancet
with a moulded continuous hood above. The third and fourth stages
have lancet-shaped belfry windows with stone slate louvres. The
upper stage windows have hoods with blind quatrefoils. Parapet
with blind trefoil arcading with a pinnacle at each corner.
Moulded strings between the first and second stages. Stepped
coped gables with upright cross finials. Circular chimney at the
west end of the north aisle.
Porch interior; C19 plank door within a reset C12 flat-chamfered
round-headed doorway with a stopped hood. Early headstone with a
circular head and crudely inscribed inscription 'T (?) M / (?)
JESPER / IRLAND / MADETH / ---- (?) N 1638 /. Upper part of a
Medieval grave slab with a cross with foliate decoration below the
latter. Lower part of the slab set in the wall opposite. Double
C19 plank doors with decorative hinges within a C19 cinquefoil-
headed surround, to the nave.
Church interior; plastered with a 2-bay C19 nave arcade with
pointed arches and a single pier in the form of four engaged
columns. C12 corbel table faces into the north aisle. Tall
pointed C15 arch of three chamfered orders, between the nave and
tower base, the inner order rises from engaged semi-circular
columns with moulded capitals. Pointed chancel arch of two
chamfered orders, with the mouldings of the capitals continued
either side of the archway. C19 trussed rafter roof to the nave,
medieval wagon roof to the chancel. Coloured tile flooring with
some encaustic tiling in the chancel and sanctuary. Stone bench
seats along the south and north walls of the chancel. Two
trefoil-headed piscinas in the chancel south wall one with
mutilated enrichment, scalloped bowl and a moulded hood which is
continued along the south, east, and north walls either under or
over various openings towards 2 aumbreys with plank doors with
decorative strap hinges. Three niches one with a rectangular
stone tank and drain in the north wall. Continuous hoodmould over
the windows in the north and south walls. Nave; high round-
headed arch with simple moulded capitals and keel moulding
continued down the jambs behind the pulpit, this arch formerly
opened into the south transept. Furniture and fittings; tub-
shaped font of c1200 at the west end of the nave. C19 pews with
fielded backs. C19 octagonal wooden font with blind tracery.
C20 chair stalls. Brass lectern. C19 Tortoise stove, by Portway
and Son, Halstead, Essex at the east end of the vestry. C19 organ
in the chancel. C19 wooden communion rail and ornately carved
reredos with crucifixion and figure of St George and the Dragon.
The C17 altar table with turned legs stands on Medieval altar slab.
Twelve circular olive wood plaques (originally 15) on the walls of
the chancel. The plaques are probably Flemish and of C15 or C16
date and form part of a rosary and depicting the Joyful, Sorrowful
and Glorious mysteries. Stained glass; there are a few fragments
of early C14 coloured glass in the heads of the lancets. The
window on the south has the Crucifixion scene at the top, the glass
is otherwise grisaille. Apart from the C14 fragments in the
chancel the glass is C19 or C20, one window by Kempe and Tower 1917
and one by Powell and Sons of Whitefriars 1928. History; the
Advowson gave the rents to Eynsham Abbey before 1264 and it is
possible that the monks of Eynsham were responsible for the
building of the chancel and tower.
(V.C.H., Glos, Vol VI p188 - 119 and David Verey, The Buildings of
England; The Cotswolds, 1979)