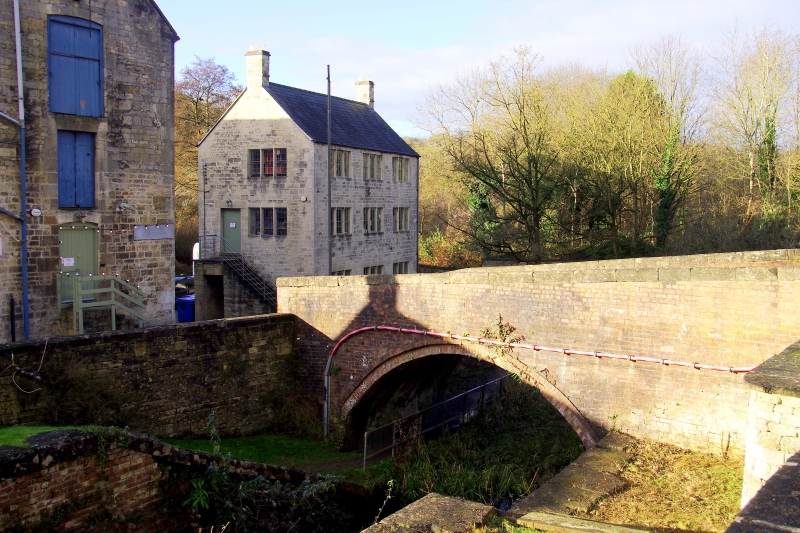 A canal lock and adjacent bridge built circa 1785 for the Thames and Severn Canal Company.

DESCRIPTION: the BRIDGE is set across the tail of the lock. Roughly rectangular on plan, its wing walls are gently curved outwards, and are battered, ending in pilasters. The arched opening is segmental, almost semi-circular. The arch has ashlar springers, and there is a plain curved string to the extrados. The parapet is plain, and it and the flank walls have plain stone copings. The LOCK has brick-built walls, which widen to the entrance at the south end. It has large stone copings and ashlar dressings at the gate positions, where there are iron fittings to the gateposts. One original lock-gate partially survives. There are double gate recesses and an arch at the top of the chamber indicates its evolution, showing where the lock was shortened to save water.

SUBSIDIARY FEATURES: the group also includes the adjacent BY-WEIR, which formed part of the site's water management system. This structure is rectangular, and partly stone-built, but was much overgrown at the time of inspection (2009).

The Stroudwater Navigation, built in 1775-9, was designed to link the River Severn at Framilode to Stroud, allowing coal to be brought from Shropshire, Staffordshire and the Forest of Dean to the textile mills of the Stroud valleys. The Thames and Severn Canal, constructed in 1783-9, was designed to run eastwards from Stroud, eventually linking the River Severn to the River Thames at Inglesham, near Lechlade. The Cotswold Canals, as they are also known, were generally successful, though the Thames and Severn in particular suffered serious technical failings which compromised its profitability; despite this, both canals continued in use well into the C20.

Bourne Bridge was built across the tail of Bourne Lock, and was also known as Harris', or Hack's, Mill Bridge. The structures were built circa 1785 on the Thames and Severn Canal, the first above the Brimscombe Port exchange; the lock was designed to accommodate both Severn trows and Thames barges as they made their way around the interchange area. This lock is unique on the canals in that it was designed to be long enough to accommodate the Thames barges (90 feet) and wide enough for Severn trows (16 feet).

REASONS FOR DESIGNATION: Bourne Bridge, Bourne Lock and the adjacent by-weir, built in 1785 for the Thames and Severn Canal Company, are designated at Grade II, for the following principal reasons:
Historic interest: as part of the C18 Thames and Severn Canal
Technological interest: the lock is unique on the Cotswold Canals as it had to allow the passage of both the long and narrow Thames barges, and the short but wide Severn trows, as they approached the interchange port between the Thames and Severn and Stroudwater canals
Intactness: the bridge is largely unaltered, and the lock remains clearly legible
Functional relationship: the three elements together form a cogent and functionally-related group which demonstrates clearly how such structures functioned together
Group value: with the Grade II listed Bourne Mills and Grade II* wool-drying stove to the south of the lock and bridge