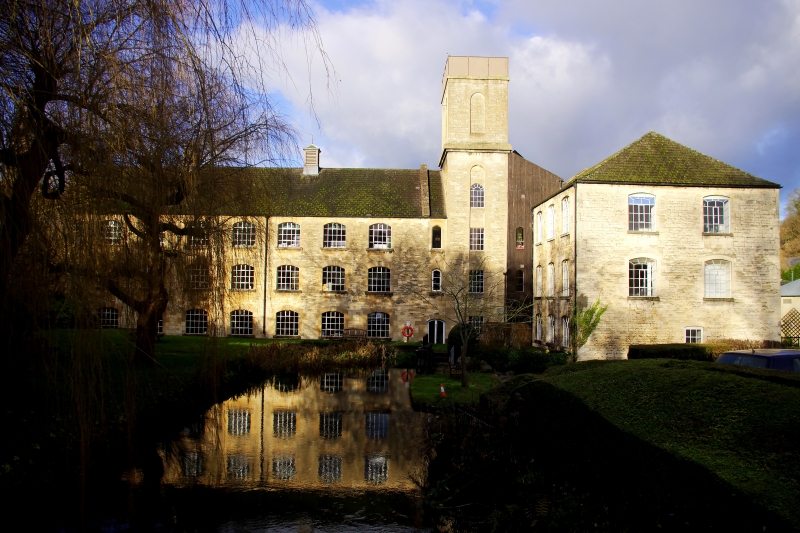 Former mill buildings, now offices, of early-C19 date, with a circa 1865 range, and some earlier ranges to the rear.

PLAN: A former mill, comprising three principal ranges connected via a central water tower. The principal range extends to the south-west and is of eight bays. It incorporates part of an earlier building, with further early outbuildings attached to the south-west running alongside the road. The two other main ranges are attached to the north-east and north-west of the tower to form an informal T-plan.
EXTERIOR: The three-storey main block has eight-window fenestration, all with keyed, segmental-arched, small-pane, fixed lights with one small opening pane. There are parapets to the gabled ends. Two square, louvred ridge-vents with pyramidal roofs and spike finials stand on the roof. The range is extended to the right with a link section having a Tudor-arched window to each floor. The water tower beyond has a full-height, round-arched recess with a small-pane, fixed-light window to each floor; and a round-arched window at attic level. There are round-arched recesses to the base of the tank. The range projecting forward to the right (north-east) is of mid-C19 date, with a hipped roof. The segmental-arched windows are of slightly different type. This range is linked to the main block by the weather-boarded rear of a north-west range, which has openings that match the main range, although there is some variation in the openings at the north-east end. The south-west end of the main range is earlier, with upper-floor level loading doors with a circular window above. An outbuilding range runs to the left, incorporating a small brick-lined niche with a stone water trough, and a chapel-like ashlar front at the far end, with a round-arched doorway flanked by narrow, round-arched windows on 2 levels. There is a circular window above. Another outbuilding, that stands detached to the north, is single storey, rendered, and has been extended to the north. It stands on the waterway edge and has a round-arched window at the south-east end. Various C20 industrial buildings are attached to the north-west range and are not of special interest.

INTERIOR: The interiors were not inspected, but do not retain any milling equipment.

Brimscombe Port was an inland transhipment port and the principal focus of activity on the Thames and Severn Canal in the late C18 and C19. The port was constructed in circa 1785, and accommodated an existing mill that stood on Brimscombe Bridge, at the west end of the port, since at least the C17 when it was called Field's Mill. The current mill may have been built on the site of Field's Mill, and Port Mill (also known as Dock Mill) is first recorded in 1744. It is marked as Mr Peaches Mill on a canal company map of circa 1789, shown on an irregular plan similar to the mainly C19 buildings that stand there today. The mill was run as a cloth mill by William Lewis in the early C19, and may have been rebuilt at this time. It was sold by creditors in 1843, at which time it was said to contain an 18 horsepower steam engine. The next owner was James Ferrabee, a local cloth manufacturer who went bankrupt in 1866, shortly after rebuilding part of the mill. When the mill was put up for auction in 1872 it was described as follows: "One of the buildings is three storeys high, 70 feet long, 35 feet wide and only built about seven years." This refers to the north-west range. Another range was described as three storeys high and 100 foot long and 24 foot wide (the main block). At this time it contained cloth-making fittings, such as looms, and there was a 20 horsepower steam engine. From the late-C19, under the ownership of P. C. Evans, and latterly Marling and Evans, production at the mill declined, eventually ceasing in the early C20. It became the Benson's Tool Works in 1948. In the later-C20 it was refitted to provide office accommodation.

Port Mill, Brimscombe, an early- to mid-C19 mill with earlier origins, is designated at Grade II for the following principal reasons:
Architectural: a fine example of a stone-built mill complex of early- to mid-C19 date, with high quality detailing.
Historic interest: is representative of the significant amount of activity on the canal network in the C18/C19, and the textile manufacturing traditions of the Stroud Valleys.