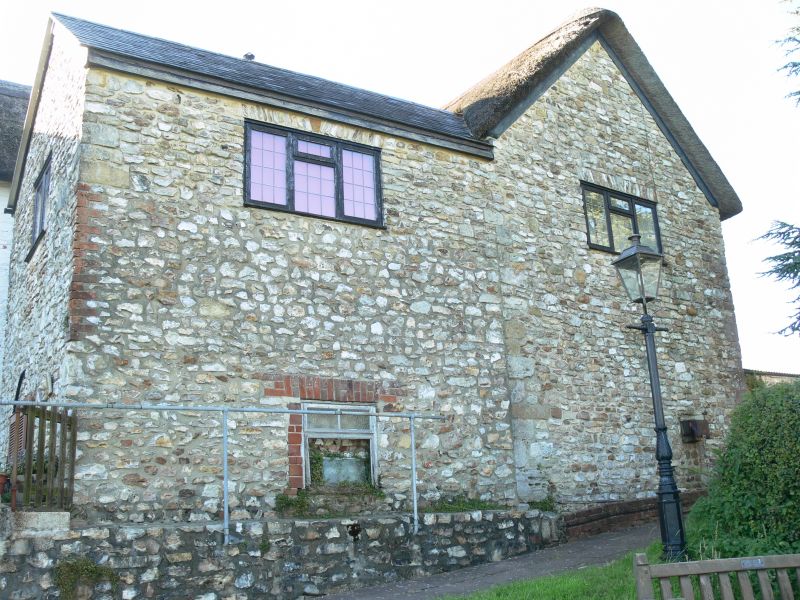 YARCOMBE YARCOMBE
ST 20 NW
7/198 The Yarcombe Inn
7.12.62
GV II
Public house, former coaching inn, on the site of (and maybe incorporating fragments
of) the former church house. Ostensibly C18 and C19 with more than one through C20
modernisation but the exposed fabric on the back wall shows various breaks and
blockings which indicate that parts date back at least to the C17. Plastered local
stone and flint rubble, maybe including some cob; the masonry is exposed to rear;
stone rubble and brick stacks with plastered brick chimneyshafts; thatch roof to the
main inn section, slate to the coach house and stables extension.
Plan: long building facing west-north-west, say west, and built down the hillslope
backing onto the churchyard. The main block, the inn proper, is uphill at the left
(north) end. It has a 3-room plan. The left room has a gable-end stack. There is
a stair between this and the centre room which has an axial stack backing onto the
right room which has a rear lateral stack. A 1-room plan rear block projects at
right angles right of centre and it has a gable-end stack. This building has been
so much modernised in the C20 that it is not possible to determine any historic
development. On the right end and the same axis is a C19 coach house and stables
which have now been brought into domestic use. The inn and former coach
house/stables are 2 storeys and there are single storey outshots to rear and a C20
garage extension on the left (north) end.
Exterior: irregular 3-window front of C20 casements containing rectangular panes of
leaded glass and the inn section includes 2 curving bay windows with thatch roofs.
The 2 doorways to the inn section contain C20 doors in traditional style. At the
right end of the coach house/stables section an external flight of stone steps lead
to a first floor doorway. The roof is gable-ended and steps down with the slope of
the land. Where the rear wall of the inn section is exposed (the north end) various
breaks and blockings can be made out, some of them defined by limestone ashlar
blocks, and there is a redundant ashlar drip ledge. This is the only apparent
evidence of pre C18 work.
Interior is largely the result of C20 modernisations and most of the features are
C19 and C20. For instance the northern most room is spanned by blocked in RSJ's.
The oldest feature is the roof which may be C18; a series of A-frame trusses with
pegged lap-jointed collars and X-apexes.
The Yarcombe Inn is a very important building in the village and forms part of a
group with other listed buildings in the vicinity of the Church of St John (q.v).
It has been said to incorporate some remains from the Guest House of Otterton Priory
but there is no evidence of this.
Source: Devon SMR.