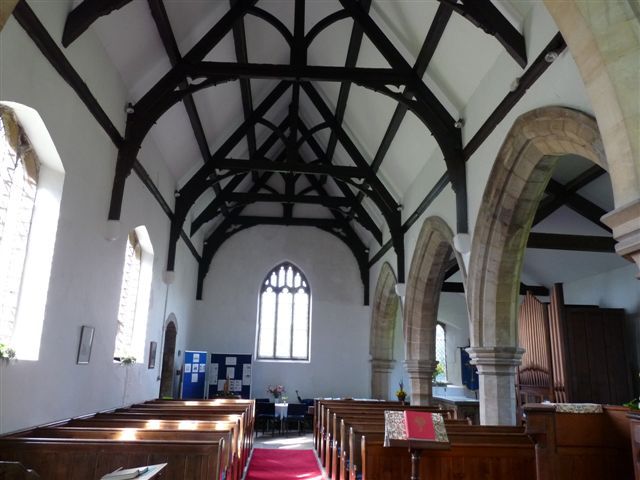 Parish church. C15 and 1869. Coursed rock faced ashlar with
ashlar dressings, plain tiled roofs with stone coped gables.
South east angle tower and spire, nave, chancel, north aisle and
south porch. The tower has an octagonal lower stage with stepped
buttresses and contains single louvred lancets to the sides.
Above a hollow chamfered string course the tall spire terminates
in a double knop. In the spire are 4 gabled lucarnes with trefoil
heads. In the west wall of the nave is a single 3 light window
with panel tracery and in the west wall of the north aisle is a
pair of lancets. The C15 north aisle has a chamfered plinth,
angle buttresses and a plain parapet. There are 3 three light
windows in the north side with tightly cusped tracery to the
heads and 4 centred arched surrounds. A priest's door has a
continuously moulded 4 centred arched surround with moulded head.
In the east wall of the chancel is a 4 light C19 panel traceried
window. In the south chancel wall is a pair of C19 lancets. In
the south wall of the nave are 2 three light windows, C19 with
pointed heads to the lights and 4 centred arched surrounds. The
gabled south porch has a pointed outer doorway with moulded head
and reveals, planked double doors and plain pointed overlight.
Pointed C15 inner doorway of 2 chamfered orders with chamfered
imposts, reveals and hood with beast head stops. Interior. 3
bay C15 north arcade, octagonal pillars with moulded capitals and
double chamfered arches, matching C19 double chamfered chancel
arch. In the chancel north wall is a small C15 4 centred arched
doorway into the vestry, the arch supported on embattled corbels.
Fittings are C19 including the plain circular tapering tub font.
Monuments: in the north aisle is a C14 tomb recess with
crocketted gable containing the monument to Thomas Wyke, Priest.
He is represented as a recumbent effigy in full vestments. Also
in the north aisle a chest tomb to William Paulet, d.l464. A
plain ashlar chest with panelled sides and a small brass
inscription panel on the top ledger slab.