A Grade I Listed Building in Halberton, Devon 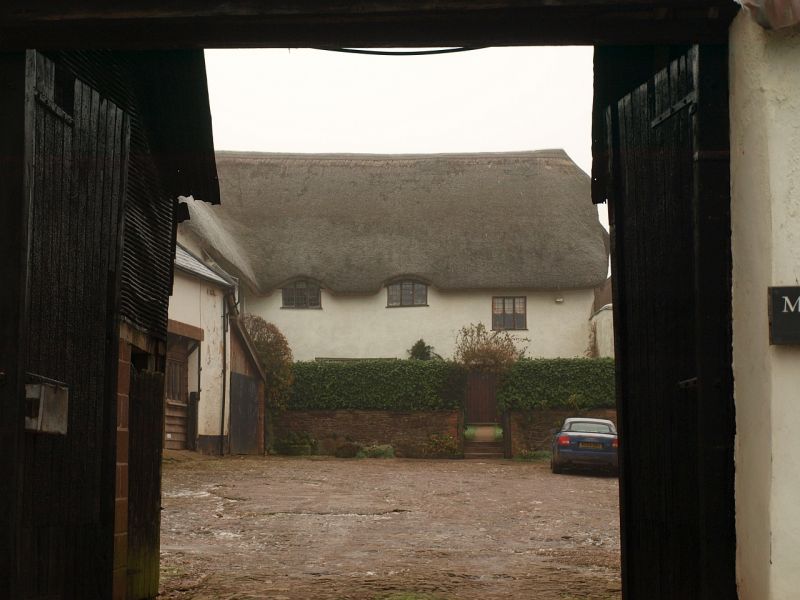 HALBERTON
ST 00 NW
5/165
- Moorstone Barton
5.4.66
GV I
Farmhouse. Mid C14 range built probably by Walter Ganson, with C15 cross-wings,
that to the north (right-hand side) demolished. Cob, stone footings, plastered,
under gabled-end wheatreed thatched roofs. The earlier (main) range conforms to the
traditional 3-room, through-passage plan, the higher end to the left of the passage,
and is heavily smoke-blackened throughout. The C15 higher end or solar wing was of
2 storeys from its inception and heated by a stone external lateral stack, now with
a small brick shaft. 2 storeys throughout.
Front: 3 window range, 3-light casement windows to 1st floor, the 2 to the left
under eyebrow eaves, all with leaded panes, 12- or 15- per light. The lower end 1st
floor window is at a markedly lower level than the others.
Ground floor: 6-light casement window to Hall, 10-leaded panes per light, and a 3-
light casement window to the right of the passage, 12 leaded panes per light. Inner
face of solar wing with one large 3-light window to each floor, with leaded lights.
Front of wing with blocked windows (see description of interior). Left-hand side
elevation: 2 old 3-light windows, chamfered jambs and mullions, 12-leaded panes to
outer light. The other windows appear to be C20.
Rear: main range with two 1st floor windows, one of 2-lights, 8-leaded panes per
light; one ground floor opening to left of passage. The line of the solar wing was
extended to the rear in the C19 with 3-light windows under a slate gabled-end roof.
The rear yard buildings are also C19, rubble with brick dressing.
Interior: One chamfered doorway arch survives in main range, probably not in situ.
Solar wing with one blocked 2-light C15 window to each floor at front end, wide
lights cinquefoil-headed and similar to late C15 east-Devon church window tracery.
Another medieval window, earlier, probably C14, a trefoil-headed lancet made from a
single block of wood, was found by Mr J R L Thorp lying in the roof space; its
original location is not known.
The house is especially important for its medieval roof; main range of 4 bays, all
heavily sooted: 2 bays to the Hall. The trusses are base jointed arches with
chamfered arched braces, threaded purlins, cranked tie beams with angle struts,
squared wall plates, crown post with diagonal curved struts, straight collar with
collar purlin. Apex morticed and pegged with no ridge piece. The arched braces to
the Hall rest on carved head corbels. One of 2 former central bosses survives, with
vine leaves and grapes. The trusses are closed above the tie beam at either end of
the hall, and a smoke-window has been pushed through one of them. The spere between
Hall and service-end differs in its bracing, which takes the form of a steeply
profiled arch. The service-end is less heavily sooted than the other 3 bays. Solar
wing roof, 4 jointed arches, morticed and pegged at apex, cranked collars, paired
threaded purlins and a complete set of coeval rafters; all clean.
Historical note: Dr Alcock believes that the roof of the main range is mid C14,
possibly as early as the 1340s, for it has some stylistic affinities with the court
style of that decade. The Ganson family had connections with the court - William
was a yeoman of the chamber of Edward III and held various west country posts as a
result of his attachment to the court circle. By the turn of the C15 the Gansons
were a prominent local gentry family, holding positions of some importance and
making marriage alliances with other leading families such as the Walronds of
Bradfield. John Walrond was married to a daughter of John Ganson in the private
chapel of Moorstone in 1449 (Devon & Cornwall Record Society, new series, Register of
Edmund Lacy... Vol.III, 34, 112). It was possibly this John Walrond (or his son,
another John) who built the solar wing.