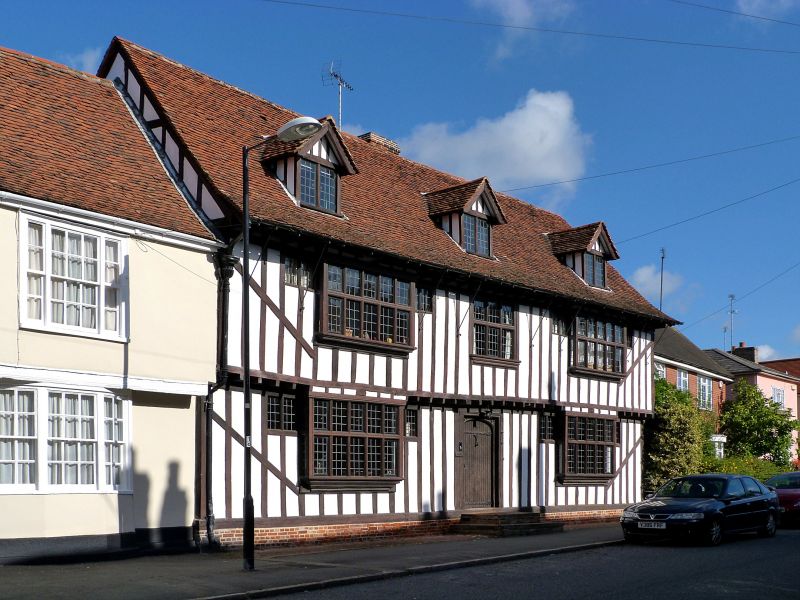 House. Early to mid C17, altered in c.1800, restored 1922. Timber framed,
plastered with exposed restored framing, roofed with handmade red plain tiles.
Main range of 5 bays facing SE with contemporary stack to rear near left end,
and later stack to rear near right end. 2-bay wing to rear of right stack, with
C20 external stack at left. One-bay wing to left of it, possibly the original
stair tower. One-bay wing to left of it, and 2 single-storey extensions beyond,
one with a central stack and hipped roof, one with a flat roof. 2 storeys and
attics. Ground floor, 2 C20 oriels of casements with flank windows in the style
of 1600. First floor, 2 similar oriels and flank windows and a C20 casement in
similar style. 3 C20 casements in gabled dormers. C20 door with 4-centred
head, roll-moulded surround, moulded and carved 4-centred doorhead in early C16
style. Full-length jetty with exposed joists of vertical section. The exposed
framing at the front, the right return and the left gable is nearly all of 1922;
the remainder is plastered over. Unjowled posts, primary straight bracing and
studding exposed internally, much restored. Chamfered transverse beams and
axial bridging beams with lamb's tongue stops, some mutilated for former
plaster, some renewed in 1922, at both storeys. Similar beams over the ground
floor of the right wing, the remainder of it fully plastered internally. The
left ground-floor hearth is original internally, wholly restored externally.
The hearth above it has original moulded jambs and depressed arch, the back and
internal splays repointed but apparently of C17 origin. The right stack has a
C20 hearth on the ground floor and an ornate Victorian cast iron grate above.
Original joggled butt-purlin roof, ceiled above collar level. Deeds in
possession of the owner or Essex Record Office from the time of George III.
RCHM 9.