A Grade I Listed Building in Threekingham, Lincolnshire 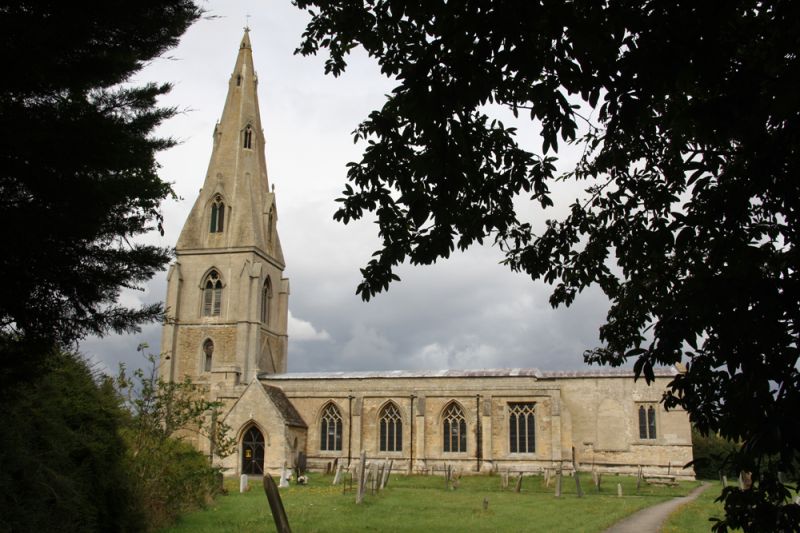 Parish church. C12, C13, C14, Spire restored 1872. Coursed limestone rubble
and ashlar, lead and Collyweston slate roofs. West tower with broach spire,
nave, chancel, north and south aisles, south porch. 3 stage C13 west tower,
coursed rubble to the lower stages, ashlar above. Chamfered plinth and
string courses, gabled set back angle buttresses. In the belfry stage are
paired louvered lights with clustered mid shafts, pointed heads to the
lights, quatrefoils and moulded shafted surrounds. The spire has 3 tiers of
gabled lucarnes in alternating directions, with pairs of cusped trefoil
headed lights to the lower stage and single lights to the upper. In the
south wall is a plain lancet and in the north wall is a large triple
chamfered pointed window. In the west wall of the north aisle is a single
small lancet and in the north wall are 5 three light C14 windows with
cusped ogee heads to the lights, mouchettes and quatrefoils in chamfered
pointed surrounds. Also a C13 doorway with hollow moulded head and engaged
side shafts with annular capitals. To the east is a single 3 light window
matching the rest. The north wall of the chancel contains 1½ bays of a
blocked late C12 arcade with stiff leaf foliage to the round capitals and
roll moulded arches. Beyond to the east is a single C12 round headed window
with roll moulded surround and head and above is a short section of reset
contemporary corbel table. In the chancel east wall are 3 round headed C12
windows with roll moulded surrounds and continuous hoods. In the south wall
of the chancel is a C14 2 light window with trefoil heads to the lights and
a chamfered rectangular surround. There is also a blocked pointed window
and a small triangular headed and chamfered priest's door. The south aisle
has a chamfered plinth and a plain parapet. To the east is a C14 2 light
window with C19 cusped Y-tracery. To the south are 3 three light windows
pointed chamfered C14 surrounds, now with C19 cusped flowing tracery. Also
a single C14 window of 3 lights in a rectangular surround with similar
tracery. At the west end of the aisle is cut a sundial dated 1688, 'The
gift of Edmund Hutchinson, Gentleman'. The gabled south porch has a double
chamfered outer arch with hollow moulded hood and human headed stops.
Inside are side benches, chamfered pointed blank side arches and cusped Y-
traceried 2 light side windows. The inner door is C13 with side shafts,
annular capitals and moulded head with floriate stops. Interior: 5 bay
north nave arcade having 3 round pillars with moulded annular capitals and
a filleted quatrefoil pillar with to the west a stiff leaf decorated
triple shafted respond. The 4 moulded and pointed western arches are C13,
whilst the eastern arch is C12 with a moulded round head. The south arcade
has an engaged octagonal western respond, single round and octagonal
pillars and a quatrefoil pillar matching that to the north. The arches of
the south arcade are double chamfered. C13 tower arch with triple engaged
shafted reveals and heavily moulded head. C14 tie beam roofs to nave and
chancel, moulded principals to the eastern section. In the chancel are the
finely carved rear arches of the C12 east windows with roll mouldings,
annular capitals and human heads. In the side walls are 2 C19 double
aumbries with moulded round heads. In the south wall is a C13 piscina
having a cambered arched opening anda single shaft with a foliate capital.
In the north wall is a blocked C12 arch with moulded round head, Fittings:
C19 carved panelling and reredos to chancel, brass altar rails and marble
pulpit. Tapering circular early C13 tub font with blank pointed arcades to
the upper parts and a black letter inscription to the splayed plinth.
Monuments: At the west end of the nave are 2 large redundant figures of a
knight and his lady; apparently Sir Lambert de Trikyngham, d. 1280, and his
wife. He is clad in chain mail and surcoat with shield and feet resting on
a lion, she in a flowing gown, feet resting on a hound. Near the south door
are 3 C14 tapering ledger slabs, one with a cross fleury. On the east wall
of the north aisle is a marble wall monument to William Fysher, d. 1674;
fluted Doric pilasters with roses in the necking support a triglyph frieze
and escutcheon flanked by urns. In the south aisle is a small slate wall
monument to Edward Dawson, d. 1787, a wreathed patera and swagged urn on a
rectangular panel with rounded ends by Casswell, Sculptor.