A Grade I Listed Building in Maldon, Essex 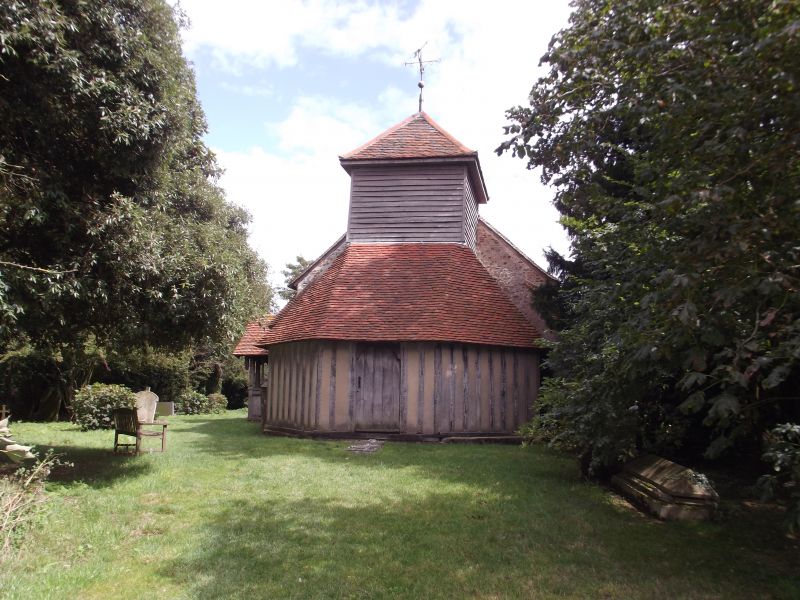 Former parish church, now vested in the Redundant Churches Fund. C14 and later.
Nave of plastered rubble, Chancel of red brick, partly plastered, belfry
timber-framed, plastered with some exposed framing, partly weatherboarded. N
porch timber-framed. Roofs of handmade red clay tiles. Nave of uncertain date,
but the earliest detail is C14. Chancel rebuilt above the plinth in C18. Belfry
c.1500. N porch c.1600. The Chancel has an early C18 E window of 3 lights with
a semi-circular head; the oak frame and wrought iron grill are original; pintles
indicate the former presence of a casement. In the N wall is a similar window
of 2 lights and a doorway with segmental arch. The wallplates are dentilled and
moulded, with 2 plain tiebeams. The ceiling is plastered in 5 cants. The Nave
has in the N wall a C14 window of 2 lights with moulded jambs, 2-centred arch
and label, and Y-tracery; the mullion is restored. Further W is the late C14 N
doorway, with double hollow-chamfered jambs and segmental arch with a moulded
label and headstops; the jambs, arch and label are carved with rosettes and
square flowers. The modern door retains one original or early strap-hinge and a
later foiled scutcheon-plate. The E end of the N wall is of plastered brick.
At the E end of the S wall is an early C16 brick archway with chamfered jambs
and 4-centred arch, now blocked, but formerly opening into a chapel; the
surrounding wall is of red brick, plastered. Above it is a C19 window. Further
W is an early C16 brick window of two 4-centred lights in a 4-centred head with
a moulded label. The S doorway is C18, with plain jambs and lintel, blocked.
In the W wall is a doorway of c.1500 with jambs and 4-centred arch chamfered in
2 orders on the E, plain-chamfered on the W. Above it is an opening with
chamfered jambs and segmental-pointed head. The roof of the nave is in 3 bays,
of crownpost construction, plastered to the soffits of the rafters and collars.
There are 3 plain tiebeams and 3 crownposts; the E crownpost is C15, octagonal
with 4-way arched braces; the others are C16, plain with axial bracing. The
belfry, of c.1500, has 4 posts in the middle forming a square, and round it is a
semi-octagonal aisle. Solid braces form 4-centred arches to E and W, closely
matching the shape of the W doorway of the nave. Halved saltire braces at the
second stage are straight on the W side, slightly arched on the other 3 sides.
Straight raking struts to the posts terminate in groundsills to N, W and S.
There is an unglazed window to N and S, with restored diamond mullions and
sliding shutters. The floor of the bell-chamber is of lodged plain joists of
horizontal section with a framed bellway (severed on one side), without boards.
The bell-frame for one bell is original, with saltire bracing; bell missing,
reported to be in the possession of Latchingdon parish church. The N porch,
c.1600, is in 2 bays. The outer doorway has moulded jambs and a moulded Tudor
arch with spiral-leaf carving in the spandrels on both sides, and a moulded
tiebeam. A projecting gable has a moulded tiebeam and bargeboards, restored
finial, roll-moulded studs with inset boarding, moulded octagonal pendants, and
carved hanging brackets similar to the spandrels of the doorway. On each side
are 4 moulded mullions. The roof is of butt-purlin construction, with moulded
wallplates, principal rafters, collars and ridge (partly missing), and
roll-moulded rafters. It is illustrated in C.A. Hewett, Church Carpentry, a
study based on Essex examples, 1982, 61. In the floor is an indent for figures
of a man, 2 wives, inscription plate, and 2 groups of children, early C16. The
fittings of the nave include an C18 plain octagonal pulpit and a complete set of
18 box pews. On the walls of the Chancel are C18 painted Commandments, Creed
and Lord's Prayer. On the walls of the Nave are C18 painted texts, decayed.
RCHM 1.