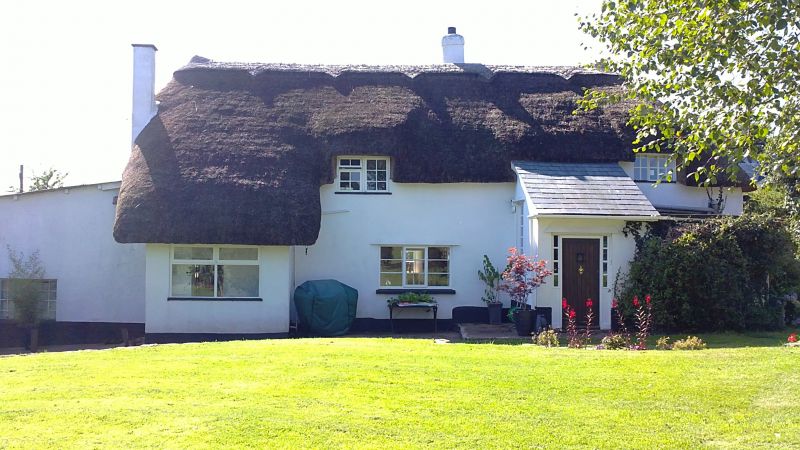 A multi-phase farmhouse dating originally from the C16. The attached former stable range to the south is excluded from the listing.

A multi-phase farmhouse dating originally from the C16. The attached former stable range to the south is excluded from the listing.

MATERIALS: the farmhouse is constructed of cob, rendered under a thatched roof.

EXTERIOR: the location of the original door into the cross passage can be seen on the west elevation, to the left of the projecting bread oven housing, where there is now a single small window. Three larger windows on the ground floor, one to the left of the original door and two to the right, denote the locations of the service room, hall and inner room within. There are three small first floor windows, one with an eyebrow dormer. The roof is thatched and is hipped to the north and gabled to the south, with a single chimney stack above the hall fireplace. At the southern end is a lean-to extension with a tall window lighting what is now a living room; this was previously a stable with hay loft above.

INTERIOR: the farmhouse is now entered from the southern end, where the previous inner room has been subdivided to form a hall and utility room, with the former stable and tack room to the south with large, repositioned beams from the former hay loft. There is a plank and muntin screen which divides the hall from the inner room; the muntins are chamfered with cut diagonal stops on both sides. The hall, now kitchen, has the screen to one side and a large axial stack to the other, this is of rubble stone with a modern lintel. The hall ceiling has large beams with deep chamfers and step stops. There is evidence above the screen for the insertion of a jettied upper chamber over the inner room.

Beyond the hall is the location of the former cross passage, this is now divided to form a small room with exposed stone walls, and a hall beyond containing a modern stair in the projecting extension. Beyond the passage is the former service end, now dining room, which was once heated with a lateral stack now removed.

The stair gives access to the upper floor where several rooms have exposed timbers and elements of the roof structure are visible.

Chamberlains Farmhouse and Willow Barn are two individual properties which were formerly a farmhouse with attached stable range.

The farmhouse dates from the C16 and was originally a three-room, cross passage house. When first built, the house probably had a hall which was open to the roof, perhaps with an open hearth fire and a small inner room adjacent to this, with the service end on the other side of the passage from the hall. A plank and muntin screen survives in the hall, separating it from the inner room, and there is evidence above the screen for a floor jettying out into what would then have been the open hall. This suggests that the inner room at least was floored over before the hall itself, with the upper room being reached by a ladder from the hall.

In the early or mid-C17, the hall was floored over creating an upper storey of accommodation within the house. Over the following years, the floor plan has been altered and the building extended. The roof is thought to have been replaced in the late C18 or early C19, and around 1980 an extension was added to the rear which contains the present stair. One end of the cross passage is now blocked; this appears to have happened in the second half of the C20.

The stable range attached at the southern end, now known as Willow Barn, was previously a stable range for the farm, appearing in its present form to date largely from the early C20. Buildings in this location appear on the tithe map of 1841, but the present single range does not appear until the mid-C20. At the time of the tithe map, the farm appears to have been known as Long Thorne, and was described as consisting of farmhouse, barn and yard. Chamberlains at this time appears to have been the name of a pair of cottages to the north.

In 2016, the stable range was converted to a separate domestic dwelling at which time it was partially rebuilt, and the roof structure replaced. Now known as Willow Barn, this range is excluded from the listing.

Chamberlains Farmhouse, a multi-phase house dating originally from the C16, is listed at Grade II for the following principal reasons:

* as an example of a three-room, cross passage Devon house with surviving evidence of the original floor plan;
* for the survival of a significant proportion of historic fabric;
* for the quality of the surviving internal plank and muntin screen, with jettied floor above.

* the building possesses considerable historic interest as an example of its type, showing evolution over time from a single storey dwelling open to the roof, to later inserted upper floors.