A Grade I Listed Building in Little Dunmow, Essex 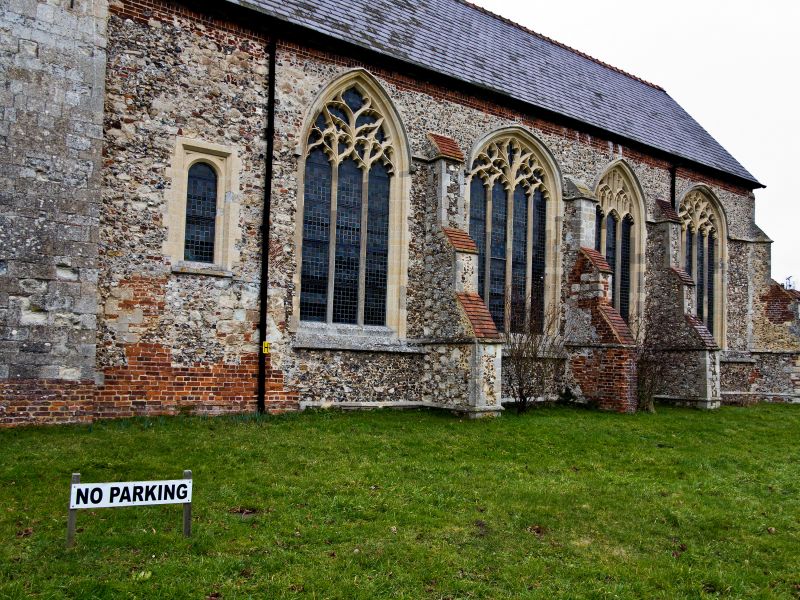 GV
I
Parish church. Formerly the Lady Chapel C14, of the Augustinian Priory of St. Mary the Virgin, founded 1106 by Geoffrey Baynard. It is all that now remains above ground, the rest being demolished after the Dissolution 1536. During C19 renovations, a turret was built to the north west on the base of a former tower pier. A vestry added to the north wall and re-roofing with scissor bracing and ashlar pieces and seven plain tie beams. Clad with grey slate tiles.

Externally; the walls are of flint rubble and brick with dressings of limestone and clunch. There are three stage buttresses to east, north east and south east and a diagonal buttress to south west. C19 doorway to west wall in a moulded stone surround and C19 windows. North wall has four C19 lancet windows and east of the vestry is a blocked, shafted, C13 window with shaft rings, below which is an area of blank intersecting arcading. East window, C19 of five lights. South wall has four fine C14 windows, eastern and third, of four cinquefoiled sub-cusped lights with flowing tracery in four centred heads, second and fourth of three cinquefoiled sub-cusped lights with leaf/vertical tracery in a two centred head; there is also to the west C16 light with three centre head in a square headed panel.

Internally; west wall has moulded string course and three panels with trefoiled ogee heads, crocketed and finial labels and carved stops. East end of north wall has a splayed recess with foiled head. East window has original splays which are continued to the floor with attached shafts, moulded capitals and bases there are four niches in splay hollows, with gabled crocketed and pinnacled canopies c.1370.

Reredos c.1370 of five niches with three sided ornamented canopies, has two pairs of panels to right and left with trefoiled ogee head and carved spandrels. Above is a rectangular panel and the embattled window cill. Adjoining north splay is a carved head. Either side of the upper part of the window are two cinquefoil headed panels. Level with the cills of the four south windows two of the springs of the window heads are moulded string courses enriched with small carvings of animals, foliage and people. Between the windows at the east end are panels in two tiers with cinquefoil or trefoil heads, some with crocketed and finial labels. Between the first and second window in the second tier is a shallow niche with moulded pedestal. There are other panels above the string course, singly or in pairs. At the west end of the wall is a blocked two-centred arch. The shafted jambs have moulded capitals and bases of Purbeck marble. South arcade c.1190 of five bays, two centre arches of three moulded orders, with remains of moulded labels. North side. Piers of four headed shafts divided by plain circular shafts, all with moulded and foliated capitals under a common circular abacus. Moulded beams have spur ornaments and rest on common octagonal and chamfered plinth with a square chamfered sub plinth.