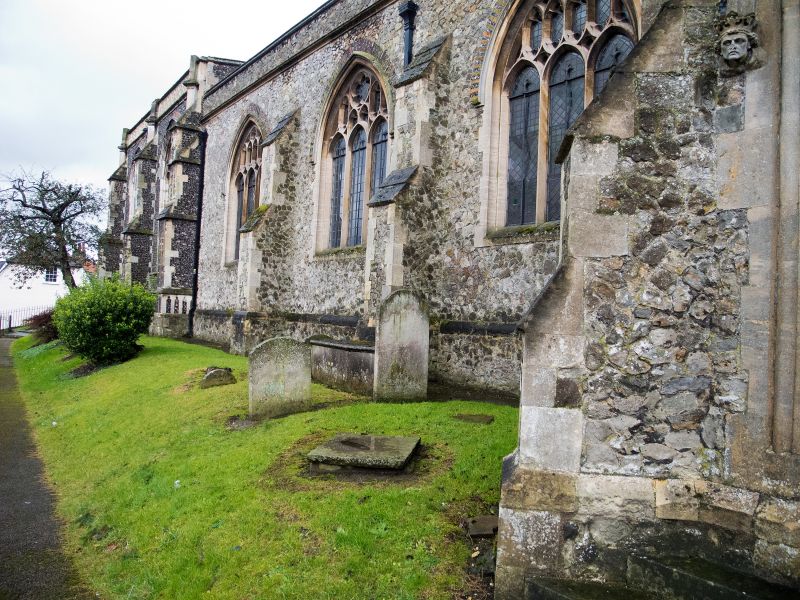 MATERIALS:
Flint and septaria rubble, partly faced with knapped flint. The tower has some Roman brick. Stone dressings. Roofs are tile and lead.

PLAN:
Nave with N and S aisles, N porch and W tower. Chancel with N and S chapels and N vestry.
EXTERIOR:
The church is the largest in Colchester, and stands on a hill, forming an important local landmark. The early C16 chancel is faced externally with knapped flints, and has a moulded plinth and buttresses with flush flintwork. The large perpendicular E window was partially blocked in the post-medieval period and heavily restored in the C19. The C16 N vestry is much lower than the N chapel and sits below a window. Both the N chapel and the N vestry have parapets ornamented with quatrefoil diapering embellished with carved flowers.

The nave and aisles have plain parapets. The nave clerestory was rebuilt in a Perpendicular style in the C19, as was the N aisle and N porch. The S door is also C19 in a C15 style, and the S aisle has heavily restored C15 windows. A partial C14 string course below the eastern windows of the S aisle is probably the remains of the S wall of a former S transept or shorter aisle.

The W tower is embattled and has brick quoins. The second stage has restored C13 windows of a single pointed light, with restored C14 two light windows in the upper, bell stage. There is a SE stair turret. The small, shingled spire was added in the C19, replacing an earlier, probably C18 lantern.

INTERIOR:
The interior is painted and plastered with exposed timber roofs. The early C15 chancel arch is very tall and wide and has a rood beam with figures. The tall 2-bay chancel N and S arcades have moulded outer arches and inner arches on attached shafts with moulded capitals and bases, forming a lozenge shape. A further arch on each side at the E end has a window. Below the N window is an Easter sepulchre, and there is a sedilia in the dropped sill of the S window. The roofs of the N and S chancel chapels are C16 and have curved braces. That on the N has probably C17 or early C18 repairs with the arms of the See of London. That on the S has the symbols of the Evangelists.

The tall, narrow tower arch has continuous mouldings and was entirely rebuilt in the C19. The arches from the aisles into the chancel chapels are C13 material reset in the C15, and may indicate the presence of former transepts that preceded the present aisles and chapels. The nave N and S arcades are of 4 bays and several periods, beginning with the two eastern bays on the S of the late C13 or early C14, then the matching bays on the N of the early C14, followed by the western two on the S of the early C15 and the corresponding bays on the N of the later C15. The earlier parts of the arcade were also partly remodelled in the C15. The Roman brick NW corner of the earlier unaisled nave is visible in the N aisle. The tower stair turret is accessed via a door at the W end of the S aisle. The nave and aisle roofs were rebuilt in the C19, but the N aisle roof has reused C15 brackets.

PRINCIPAL FIXTURES:
The church was reordered in the 1950s. Chancel piscina, C16 piscina in N chapel and a C14 piscina in S chapel. The chancel, S chapel and S aisle have sedilia formed by dropping the sills of windows. Statue bracket in S chapel, with a supporting angel. S chapel screen 1899-1900 by T J Jackson in a delicate Art and Crafts perpendicular style. Oak pulpit by H and K Mabbit, 1951. Glass of 1843 by Warrington in the S chapel.

Monuments: some good monuments, including brasses to John Maynarde, d.1569 and Alys his wife, d. 1584, the later a palimpsest on an older, draped figure. Wall tablet to Thomas Reynolds, d.1665 and his wife Margery, d. 1649. large standing wall monument to Arthur Winsley, d. 1727 with a semi-reclining figure in Augustan mode.

HISTORY:
The church of St James was first mentioned in the mid C13, but the architectural evidence suggests that it is considerably earlier. In the C13 it was held briefly by Coggeshall priory and later by St Botolph's before passing to the Audley family after the Dissolution. The NW corner of the long nave survives and has Roman brick, suggesting a C12 or earlier origin for the church. The long nave and possible transepts also hint at the presence of a pre-Conquest structure below the present building, but this cannot be confirmed. The tower was added in the C13, and also in the C13 the eastern bays of the S arcade were built. The arches into the chancel chapels also reuse C13 material, perhaps from former transepts. The eastern part of the N aisle was built in the early C14 and both aisles were reworked and extended in the C15. There were anchorites associated with the church in the C12 and C13, and in the later middle ages, it had an active parish life with several guilds that had altars within the church. The chancel was rebuilt in the early C16, and its chapels and vestry are contemporary. Little is known of work carried out on the church in the post-medieval period, but the tower was `decayed¿ in 1633 and the small lantern shown on it in early prints may have been C17 or C18. The advowson was in the hands of the Bishop of London in the early C18, which may provide a date of the repairs to the N chapel roof. The church had fallen into disrepair by the middle of the C19 and was heavily restored and partially rebuilt in 1870-1 to designs by S S Teulon (1812-73), a well known church architect. Samuel Sanders Teulon (1812-73), was a well-known and active church architect who worked primarily for Low Church clients. His work is often made striking by the use of structural polychromy and exotic architectural details. From the end of the C19 it has been a focus of high church worship in Colchester. There were further minor alterations in the late C19 and some reordering in the mid C20. A new vestry ('very horrible' Pevsner) was added on the S by Duncan W Clark in 1953.

REASONS FOR DESIGNATION
The church of St James and St Paul, East Hill, Colchester should be designated at Grade II* for the following principal reasons:
* Fine, multi-phase medieval church, heavily restored in the C19.
* Excellent C16 chancel, chancel chapels and N vestry with fine flint flushwork detailing and excellent work inside including C16 roofs to both N and S chancel chapels.
* Nave with arcades of the C13-C15, preserving evidence for a large, possibly cruciform, early church.
* Good landmark value.