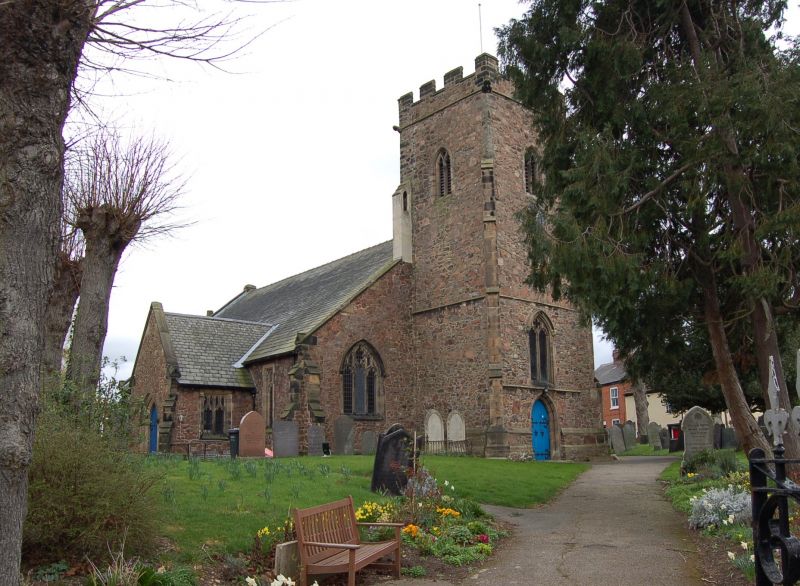 Church of England Parish: Thurmaston St Michael and All Angels

Parish Church, exterior largely of 1848 though the west tower is C14. Internally
some early C14 work remains, including the arcades. Randomly coursed granite
rubble throughout, with ashlar dressings. West tower, nave with 2 aisles, chancel.
Buttressed tower of 2 stages, with C19 west doorway in roll moulded and hollow
chamfered arch. 2-light C19 century window above. Paired foiled lights to bell
chamber. Embattled parapet with gargoyles. Buttressed south aisle is of 1848:
the west window is in a Decorated style the others are Perpendicular. 3-lights
with paired lights above, in square headed openings with hoodmoulds and corbel
heads. South doorway has roll moulded and hollow chamfered archway. Aisle and
nave under a single sweep of roof. Chancel also of 1848 in Decorated style.
4-light east window. To the north east of Chancel a polygonal projecting chapel.
North aisle has similar details to south, with the addition of a large gabled
porch with parvise.

Internally, the arcades of the medieval church survive, and are of c1300. 5
bays round-chamfered arches on alternately octagonal and clustered columns,
with heavy abaci western bay is a shallower arch of less height and later date,
linking the existing church with the added tower, which has a tall double-chamfered
arch. Nave roof is Victorian, an ornate and unusual construction, since the
aisles are roofed under the same slope, the roof carried clear of the arcade
wall on a higher timber arcade. Nave roof itself is of hammer-beam construction,
ornately decorated in the spanadiels at the main braces. Narrow North doorway
with double chamfered arch and responds.

Chancel arch is east of the steps up to the chancel, and rests on high corbels.
Scissor braced roof 4-light east window with stained glass of 1879. East windows
of aisles contain glass of 1845, in the style of a painting.

Font probably Victorian, squared lower base rises through chamfering to an
octagonal section from which concave curves spring to support the plain octagonal
basin.