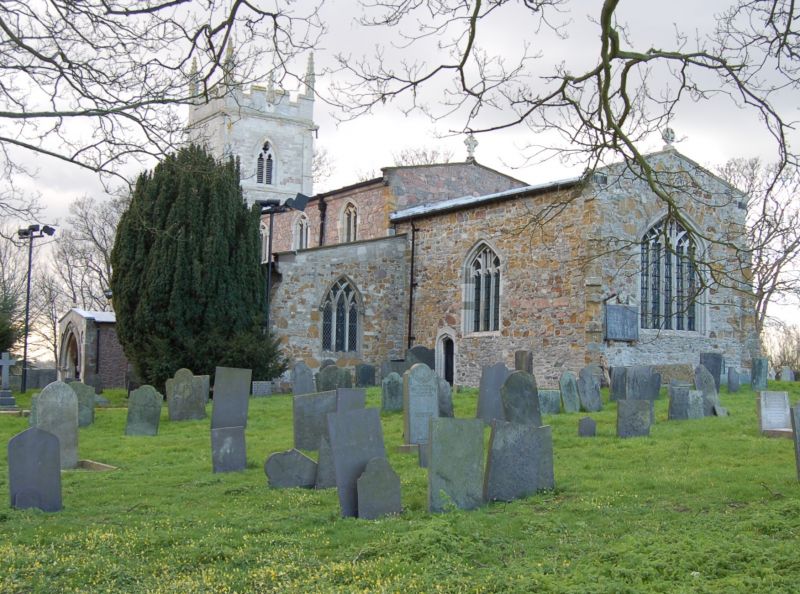 Church of England Parish: Rearsby St Michael and All Angels

Parish church. Largely late C13 to early C14. Sandstone and granite rubble
with ashlar dressings, low pitched leaded roofs. West tower, nave with clerestory
and 2 aisles, chancel. Tower is Perpendicular, white ashlar in banded courses.
Buttressed, 2 stages with embattled parapet with gargoyles and corner finials.
Paired foiled west window and light to bell chamber. South aisle is a C19
restoration in granite with ashlar dressings including an eaves cornice. Windows
are paired cusped lights in the Decorated style, with hood moulds and corbel
heads. South porch a shallow gabled Victorian structure with wide archway
ornamented with vine scroll and cusps on shafts with foliate corbels. Carved
cross motif recessed to each side of it. South doorway also Victorian, a Decorated
arch with shafts and leafy capitals. East wall of aisle apparently original
sandstone rather than granite rubble. Granite rubble clerestory with paired
foiled lights. Chancel is also of sandstone rubble with some granite. A small
ogee arched priests door to west and good perpendicular tracery to 3-light
north and south windows and 5-light east window. Over the east window 2 blocked
2-centred arched lights. On the east wall, a memorial with inscription on a
slate beneath a sandstone broken pediment and shield of arms, to Richard Benskin,
d 1756, and Sarah, d 1741. East wall and west bay of north aisle are of granite
rubble, the rest sandstone, probably all C19, though the north doorway, with
shafts, roll moulding and hoodmould is late C13. Aisle windows are 3-cusped
ogee lights in square headed arches.

Inside, thin painted double chamfered tower arch on shafts. Nave of 4 bays
with south arcade the earlier and probably late C13. It has round piers with
octagonal capitals. The east and west responds are slim columns, that to east
has a worn stiff-leaf capital. Single chamfered arches with an outer chamfer
or hoodmould also springing from the capitals. North arcade is slightly later,
with narrower octagonal piers. Otherwise its detail is very similar. Nave roof
is C19: moulded cambered trusses. Piscina in south aisle. Chancel arch is double
chamfered and springs from corbels. There is a mid-Victorian openwork wood
traceried screen on a stone base which incorporates the ornate stone pulpit
to the north. Piscina and reredos in south wall of chancel are late C13, but
other features are Perpendicular. Its Victorian roof has moulded trusses with
painted bosses.

Font, C13, a rounded basin with 4 clusters of shafts supporting a carved but
mutilated rim, and having carved capitals and bases standing free of the central
round base.