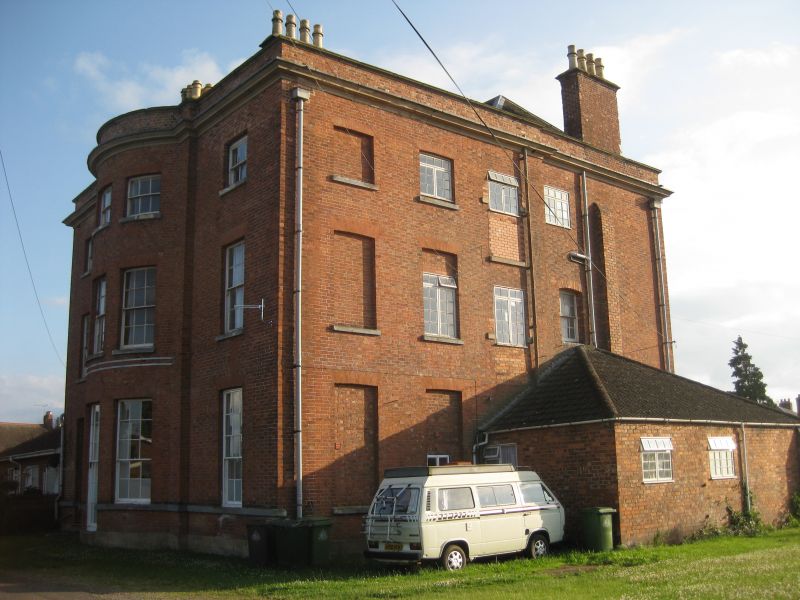 2.
A late-C18 house built of red brick with ashlar dressings and with a slate and tile roof. It has three storeys and a basement. A stone plinth and cornice circle the building, as does a solid brick parapet with coping stones.
EXTERIOR: The western front has five bays arranged symmetrically in a 1:3:1 pattern. The three central bays project slightly and are crowned by a pediment which contains a coat of arms, flanked by swags. The central doorway has a porch with Ionic columns and responds and a fluted frieze. There is an oval patera to the porch ceiling. Behind is a door with five glazed panels and an original fanlight with delicate lead decoration between the radiating spokes. To either side are arched windows at ground floor level, with a continuous cill band and a further band at the level of the springing of the arches. To the first floor, the central window has a shouldered ashlar architrave with brackets supporting the cill. At either side are sash windows of 12 panes with stone cills. The second floor has 6-pane sashes with stone cills and the central window has a lugged architrave. There are chimney stacks at each side of the building with stone caps. The rear, eastern, front has a large central bow of three bays, at either side of which are single bays. There is a continuous band at the level of the ground floor window cills. There is a glazed door to the centre and to the left hand bay. The ground floor windows have 15 panes with 12 panes to the first floor and 6 to the second floor. Single storey, C20 additions project from the north and south side and both flanks have three bays of blind windows to their eastern side, some of which have had C20 casements inserted.
INTERIOR: The central staircase has been removed and ground and first floor rooms have been subdivided to create flats. The service staircase on the south front survives with stone treads and a C20 wooden balustrade. The entrance hall on the west front has a relieving arch surrounding the fanlight. This has palm and frond ornament and there are roundels with harebell and ribbon ornaments to the corners and a rich cornice with mutules and oval florettes. The surface of the ceiling has panels with harebell and ribbon decoration. The north-western room has a rich cornice. To the centre of the east front is a room with bowed east wall which has a frieze with egg-and-dart decoration, sunken panels to the edges of the ceiling and guilloche mouldings to the ceiling border. The room above this at first floor level has richer treatment, with a dentilled cornice with egg-and-dart and a frieze featuring anthemia and vase ornament. Arched alcoves to either side of the southern chimney breast have arabesque ornament to their tympana and to the panelled soffits. A further first floor room has a blocked, arched opening; perhaps, originally, for a bed alcove. Other rooms have plain cornicing or no decoration.
HISTORY: The building was formerly known as The Hall and is believed to have been built for the daughter of the family who owned the adjacent property, The Old Wall, New Street. Until the early-C20 the house had extensive gardens which have now been largely built over. A new road was laid out to the north, separating the house from its coach house and other service buildings and the house was converted to flats in the 1970s.
SOURCE: John Newman and Nikolaus Pevsner, Buildings of England: Shropshire, (2006), 676-7.

* The quality of the architectural design of the building and its careful detailing are of more than special interest.
* The internal decoration, especially the plasterwork in the principal rooms, is of high quality.
* The building has considerable local interest as the former home of one of the town's foremost families.