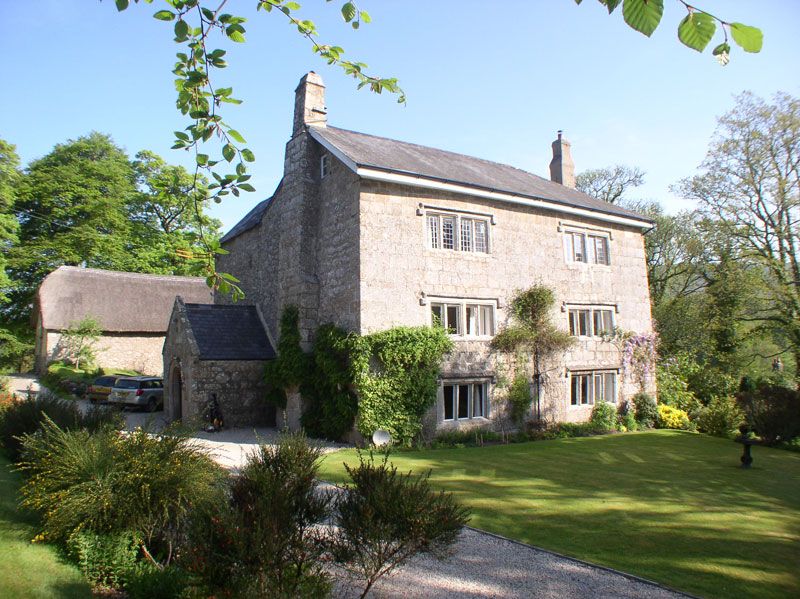 House, part of former country mansion. Late C16-early C17, maybe as late as the
1649 dateplaque; service block extended in C19, modernised circa 1980. Most is
granite stone rubble but the main front is coursed blocks of massive granite ashlar;
granite stacks, the oldest with granite ashlar chimney shafts; slate roof.
Plan: L-shaped house. The 2-room plan main block facing south-east contains the
principal rooms which are served by both rear lateral and end stacks. To rear of the
left (south-western) end is the main entrance lobby and projecting stair turret. To
rear of the right end the kitchen projects at right angles. The former end stack is
now axial since this block was extended back another room in the C19 and the has a
projecting lateral stack on the inner side. It seems that this is only a part of
the late C16-early C17 mansion. The main block probably continued further to the
south-west. 3 storeys throughout.
Exterior: nearly symmetrical 2-window front of original granite-mullioned windows.
All have hollow-chamfered mullions broad bead-moulded reveals and hoodmoulds with
plain square labels. Ground floor left is 3 lights, the rest are 4 lights with
central king mullions. Only the second floor windows still contain rectangular panes
of leaded glass. The roof is hipped to right and gable-ended to left. The left end,
including the side of the stair turret is blind except for a small loft window to
right of the projecting ashlar stack. It does inlcude some irregular blockings or
patchings but they are not clear enough to work out what was going on. The main
doorway is a little left of the stack. Its ashlar-fronted porch is gabled and
includes a round-headed outer arch with a broad bead-moulded surround and hoodmould.
The doorway itself is a smaller version of the outer arch and it contains a C19
panelled and part-glazed door. Directly above a plaque is fixed to the wall; it
bears the date 1649 in a simple geometric pattern. The end of the stair turret
contains two C19 4-pane sashes, the top one enlarging an original window.
The right end of the main block is also blind and the rear block has an irregular 4-
window front of various casements. The oldest are oak-framed containing rectangular
panes of leaded glass, some maybe as old as C18. Others are C19 with glazing bars
and occasionally a C20 casement without glazing bars. Most have exposed oak lintels.
C19 part-glazed panelled door near the front block blocking an earlier and larger
doorway and another C19 door is the only feature of the rear gable end. Other side
of the rear block contains similar irregular fenestration except for one light of a
partly blocked original granite-mullioned window on the third floor.
Interior: has been much-refurbished in the C19 and C20 but much of the early fabric
and some good detail nevertheless survives, much of it uncovered since circa 1980.
From the entrance hall a granite low segmental arch with hollow-chamfered surround
leads to a spacious newel stair with the steps made from solid oak baulks. The left
front room (nearest the entrance) was a good parlour. The fireplace is the finest in
the house; it is granite with a Tudor arched lintel and moulded surround. Also most
of the walls here are still lined with C17 small field oak panelling. By contrast
the right room has a plain granite fireplace with a soffit-chamfered oak lintel and a
soffit-chamfered crossbeam. Kitchen to rear has a massive granite fireplace with a
soffit-chamfered oak lintel. It has been reduced in size and a large brick-lined
bread oven built into the blocking. C18 doorway to front block. The original is
blocked; granite with segmental head and broad hollow-chamfered surround. The
ceiling, like those of the upper rooms, is flat and here the joists of large
scantling are exposed. The fireplace in the upper rooms are of granite ashlar with
chamfered surround, the larger with pyramid stops. The fireplace in the first floor
right room has an overmantel of C17 ornamental plasterwork. An heraldic achievement
is flanked by W initials with floral sprays beyond. All over them the name Upcott.
Most of the joinery detail is C19 but there are a number of early C18 2-fielded panel
doors. Roof structure is completely early C20.
Whiddonpark House is probably just a part of a larger mansion, probably the largest
and most important in the area. It was the seat of the Whiddon family from the mid
C16 to 1761. According to Polwhele writing in 1797 it was then ruinous and Swete in
1781 wrote it was "an old edifice blocked up towards the part which had the wildest,
most remantic appearance." The estate was bought up by the Drewe family who built
Castle Drogo on the ridge opposite.
Sources: Polwhele, History of Devonshire, Vol.2 (1797), p.73; Reverend John Swete, A
Tour Across Dartmoor into North Devon (1789)