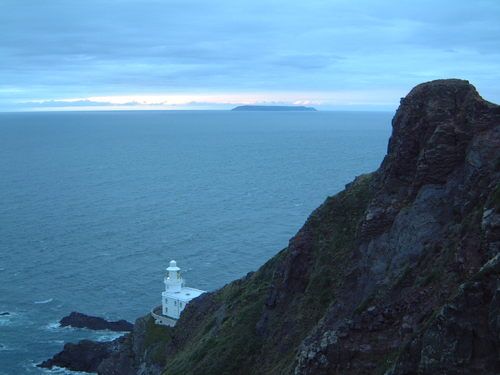 Lighthouse. 1872 - 1874. Engineer was Mr. Douglas (afterwards Sir James Douglas),
surveyor Mr. Beasley and built by Mr. Yerward of Wales. Rendered stone which was
hewn from the blue slatey rock on the site. Circular tower 57' high and 120' above
sea level. Square 2 storey building attached. A substantial part of the associated
building was demolished circa 10 years ago (surveyed in 1988).
Previous to the erection of the lighthouse the site was totally inaccessible and a
new road had to be built, started in 1871 The foundation stone of the tower was-laid
in November 1872 and during construction a sealed bottle containing the names of
those present, some current newspapers and a few coins were built into a cavity.
The light was fixed by Messrs Chance Bros of Birmingham - a revolving dioptric light
giving red and white flashes every 30 seconds visible from a distance of 17 miles.
The opening ceremony took place on July 1st 1874 when Lady Stuckley of Hartland
Abbey lit the lamp.
Source: Hartland Lighthouse - R. Pearse Chope. Hartland Chronicle July 1905