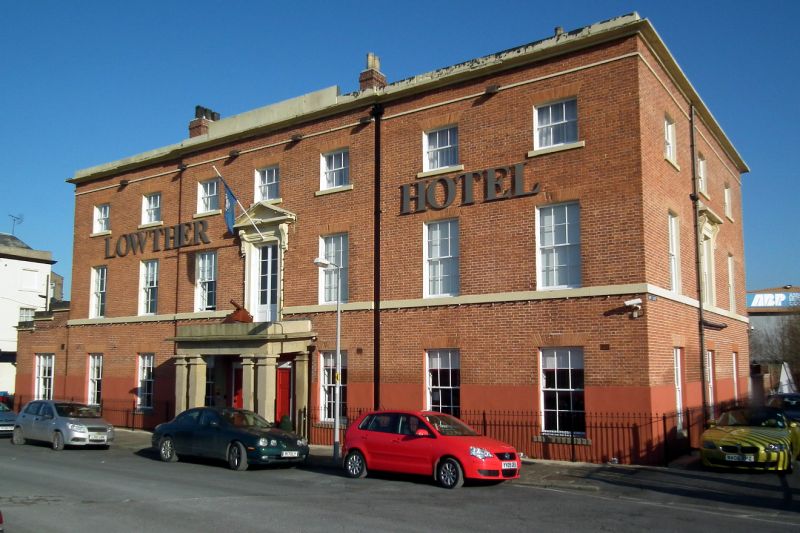 MATERIALS
Fine, red stock brick in Flemish bond, English Garden Wall bond to the rear, sandstone ashlar dressings, slate roof. Render to the lower half of the ground floor to the east and south. Windows are single glazed timber sashes that are mainly modern reinstatements.

PLAN
The three storey principal block is double pile with a central entrance leading to a central, transverse stair hall, the stair being to the right (south) leading up to a broad first floor landing. On the first floor to the front, there is a suite of three rooms, interconnected by double doors. To the north of the principal block there is a single storey extension for a public bar fronting onto Adam Street. Extending to the rear along Adam Street, there is a two storey service range fronting onto the courtyard to the rear of the hotel.

EXTERIOR
East (Aire Street): The principal block is of 2-3-2 bays with the three central bays being slightly narrower and broken slightly forward, all topped by a projecting ashlar parapet with a narrow ashlar band below. The parapet, which is stepped up to the centre, largely conceals the shallow pitched roof with its brick ridge stacks. To the centre of the elevation there is a projecting, flat-roofed, ashlar porch supported by paired square columns with similar paired pilasters flanking the entrance. Access to the roof of the porch is provided by a set of tall, French doors with margin glazing, framed with an ashlar architrave and protected by a triangular pediment supported by consoles. Other windows are multi-paned sashes (6-over-6 to the ground and first floors, shorter, 3-over-3, to the second floor) all with cambered arches of gauged bricks. The first floor has a projecting sill band, windows to other floors have thinner, projecting stone sills. The single storey extension to the left is a single bay, set back with a stepped, coped parapet with cornice. It has a tripartite, multi-paned sash window set beneath a cambered arch of gauged bricks.

South: Three bays fronting onto Banks Terrace are similarly detailed to the front elevation, but with the central first floor window architraved and protected by a flat hood supported by consoles. The south elevation of the rear service range is of three bays, continued with a further two bays to the east that are lower, but still two storeys. The lower section is a former carriage house and appears to have been truncated to the east with the loss of at least one further bay. The two surviving carriage openings are formed from substantial stonework with joggled, flat arched lintels with segmental brick relieving arches above. The first floor openings have segmental brick arches. The openings in the taller section have cambered arches in brick, windows to the first floor being 2-over-2 sashes, those to the ground floor being taller, 4-over-4 sashes.

Rear: The elevation lacks bands and the parapet has a plain coping. Windows have stone sills and plain lintels. To the centre of the ground floor there is an enlarged opening with a segmental brick arch covered by a later canted bay constructed in timber with a central doorway.

North (Adam Street): The north elevation of the main block is similarly detailed to the rear, but with more scattered fenestration and with a projecting shaft originally designed for sanitary facilities. The ground floor extension is in Flemish Bond topped by a corniced parapet. It retains its ornate timber shop front of five segmental headed lights flanked by double doors with large segmental overlights, all topped by an entablature with an ornate cornice. The doors are six-panelled and framed by pilasters supporting elaborate pedimented brackets.

The service range to the east is utilitarian in design with a pitched roof without parapets. Windows are generally 4-pane sashes, openings with brick cambered arches.

INTERIOR
The entrance and stair hall has an encaustic tile floor featuring a geometric design. The principal staircase is a cantilevered, open string stair with a wreathed handrail supported on thin, turned balusters, starting with a curtail and serving both upper floors. The hall and landings are subdivided by broad basket arches with panelled soffits, supported by pilasters. The ground floor has had some alteration to its plan form with the northern front reception room opened up to the former public bar fronting onto Adam Street, as well as the knocking-through of two of the reception rooms to the rear.

The layout of the first floor is unaltered. It includes a suite of three rooms to the front of the hotel, interconnected by double doors. These three rooms retain a complete decorative scheme of wall paintings that are thought to date to 1828-30, painted by a Mr Bromley, Shipping Agent, Master Mariner and Mural Painter. The northern room has a full colour mural of Goole docks covering the east wall, with monochrome designs to the other walls including a wreathed medallion portrait of Sir John Lowther on the chimney breast and a second medallion between the two west windows marking the opening of the Goole and Knottingley canal in 1826. The central room, a lobby which also opens out onto the balcony, has similar monochrome decoration. The larger southern room also has a complete decorative scheme, including two full colour murals flanking the chimney breast on the east wall depicting further scenes of the docks. The chimney breast itself carries a wreathed medallion portrait of King George IV.

The principal block has a full cellar that is divided into brick vaults to the rear (one thought to have served initially as a bonded warehouse) and divided into a series of rooms to the front with the joists of the first floor exposed in the ceiling.

HISTORY
The history of the Lowther Hotel is intimately bound up with that of the history of the Port of Goole, which was developed as a company town by the Aire & Calder Navigation Company from the 1820s onwards. Goole was the largest, most ambitious and until the 1920s at least, the most successful of the new ports established by various canal companies nationally (such as Runcorn, Stourport and Ellesmere Port). The hotel was the first permanent building to be completed in the new town, started in 1824 and open for business before the opening of the Knottingley and Goole Canal in 1826. It was built for Sir Edward Banks, of Joliffe and Banks (the constructing contractors for the first docks) and was initially called the Banks Hotel. It was sold to the Aire & Calder in 1828 and renamed following the death of the company chairman Sir John Lowther c.1836. The principal suite of rooms on the first floor was used by the Aire & Calder for board meetings until the 1950s. This (using a public building rather than purpose-built offices) was typical practice in the early C19, even for companies as large and significant as the Aire & Calder, sometimes jokingly referred to as the "Fourth Estate of the Realm". The wall paintings in the first floor suite are thought to date to before the death of King George IV (1830) and yet depict buildings that were built at a later date, suggesting that one purpose of the murals was as a prospectus for potential investors in the new port. The Aire & Calder Navigation Company effectively acted as the local authority for Goole, operating out of the Lowther Hotel, which acted as the town's principal civic building for much of the C19, including the use of one of its cellars as the town lock-up. The company's control over the town only started to be eroded in 1875 following the establishment of an independent Board of Sanitation. The Lowther also acted as a Customs House for a time following the opening of the port to foreign trade in 1828, using one of the cellars as a bonded warehouse until the construction of a purpose-built Customs House in the 1830s. As is typical of commercial buildings, the Lowther underwent later development such as the addition of a public bar fronting onto Adam Street. The Lowther also featured in various local historical events such as being the focus of rioting on General Election day in 1880 and being one of those buildings in the town damaged in a Zeppelin raid in 1915.

REASONS FOR DESIGNATION
The former Lowther Hotel is designated at Grade II* for the following principal reasons:
* Historical: As the key building in the development of the company town of Goole in the C19; the first permanent building constructed; the town's principal municipal building for much of the C19; and the operational base for the Aire & Calder Navigation Company into the C20.
* Murals: The rare survival of a complete set of early C19 painted wall decorations in the principal suite of rooms and the way that they clearly illustrate the connections between The Lowther, the Aire & Calder Navigation Company, and Goole.
* Architectural: As a good and well executed example of late Georgian design, demonstrating the confidence that Sir Edward Banks (of Joliffe and Banks, possibly the most successful and significant civil engineering firm of the early C19) had in the development of the new port.