A Grade I Listed Building in Shillington, Central Bedfordshire 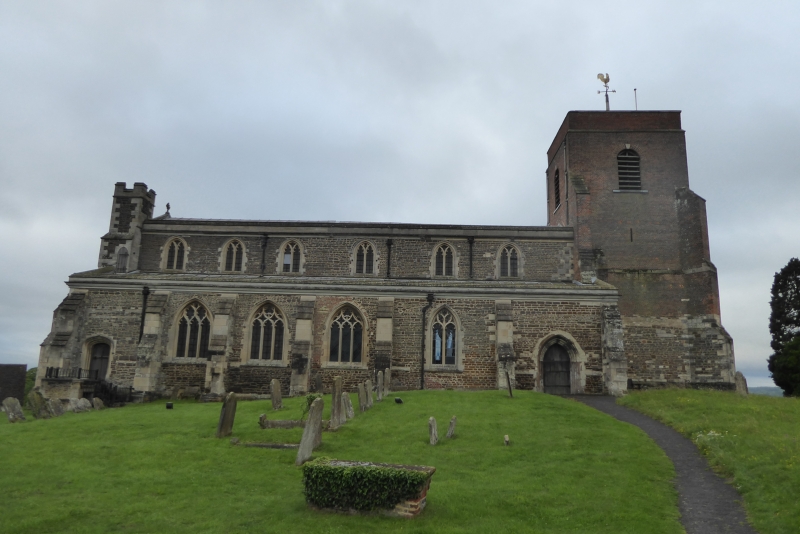 Parish Church. Predominantly C14, with C18 tower,and C19 tracery to many
windows. Coursed ironstone rubble with ashlar dressings. Parts of tower and
other patches of repair in red brick. Chancel, N and S chapels, nave, N and S
aisles,S porch, W tower. Externally no distinction between chancel and nave
clerestories or between chapels and aisles. Total clerestory has 6 windows
per side, all of 2-lights with pointed heads, 3 lighting nave, 3 lighting
chancel. Combined aisles and chapels have to each side 3 3-light windows and
one 2-light window, the tracery varying on each side but matched by that on
opposite side of church. Chancel: 3-bay arcades each side, E bay of both
blocked to springing level. E end of chancel has vaulted crypt necessitated
by sloping site. 4-light pointed arched E window is C15 insertion within
larger original winnow opening. Plain parapet above has carvings of an ass
and a tun, the rebus of Matthew Asscheton (see below). Flanking window are 2
embattled rectangular turrets containing stairs to roofs. Pointed chancel
arch. N. and S Chapels: each of 3 bays. Each has 3-light E window, S one
with cambered head, N one with pointed head. N chapel has small N door to E
bay. S chapel has single light to E bay and small pointed S door to W bay.
Pointed chapel arches. Nave: 4-bay arcades to both sides. N and S aisles:
each has 2 windows. Each has C14 pointed arched doorway in W bay, the S one
enclosed within C19 gabled porch. This replaced original 2-storeyed porch, of
which ogee-headed staircase doorway is retained of door. At W end of S
aisle is blocked C15 4-centred doorway. W tower: rebuilt 1750 after
collapse of original one earlier in century. Retains original tower arch. 3
stages, upper of 2 of brick. Diagonal buttresses to W angles. Bell-stage has
round-headed louvred window to each side. 2-light W window with C19 Gothic
tracery to ground stage. Plain parapets throughout building. Interior:
heavily restored octagonal font. C19 roofs, although re-using some original
timbers. Good screens to chapel and chancel arches and enclosing chancel,
mostly C15 with some C19 panels. Some medieval pewing, including some N aisle
ones with re-used screen panels. N chapel has fine brass to Matthew
Asscheton, Rector of Shillington (d,1400)and another C15 one to a priest.
Floor slab to James Hanscombe, d.1660. Wall tablet to John Briscoe (d.1766)
and Longueville family, of white and gray marble, with putti to apron.